or a Day at a Dog Show in Surrey

I recently visited the Richmond Championship Dog Show, confusingly not held at Richmond, but at Loseley Park near Guildford.  The show had a comforting familiarity to it, no doubt due to the many agricultural shows that I used to visit.  With all these outdoor shows,  the weather makes such a difference.  Like Glastonbury, one year you can be wallowing in mud and, on another such as this year, enjoying a mellow late summer’s day.

When I started out in my working life, I was required to visit agricultural shows across the south of England. These ranged from the Royal Cornwall Show to the Suffolk Show near Ipswich.  However, it was the smaller events such as the Melplash Show near Bridport in Dorset; or, towards the end of the season, the Moreton in the Marsh Show in Gloucestershire, that really appealed.  These were small one day shows still very much rooted in the local community.  Having a champion ram or bull at one of these events, meant that for the next year the breeder could walk around the local livestock market with a bit of swagger.  I spent a lot of time at these shows, mostly with the farmers who had entered livestock and were competing for the various titles.

These memories were brought back by attending the annual Richmond Championship Dog Show which has been running since 1895. This makes it one of the longest established and best known dog shows in the UK. There was a large field with Marquees containing show rings, benching areas and facilities for judges and Stewards.  There were also the obligatory avenues of trade stands from where everything you may possibly need for your dog could be obtained.  There was even one stand producing rosettes so that, as far as I could see, if one of your dogs had failed to win anything, it could return to its kennel mates head held high with the rosette of its own!

It is the people participating in the shows that make them the wonderful experiences that they are.  How individual breeders deal with the capricious nature of this “sport” is an entertainment in itself.  The way they show the elation of winning, or explain defeat, never changes.  “He has received some lovely comments today”, is easily interpreted as my animal hasn’t done very well but I still think this is a wonderful example of the breed.  A complicated explanation of how the person showing the animal has previously fallen out with the judge, can be an honest explanation for why an animal has not performed as well as it should.  Alternatively, it can be as about as honest an explanation as that given by a football manager for why the referee should have awarded a penalty to his player who had clearly dived.

Show folk, whatever kind of animal involved, wherever they are in the world, all want to show their animal to its best advantage. Then it can be compared to those of their friends and neighbours who, for this one day, are their fiercest rivals.  It is not just the show animal that has to look good – the handlers will wear the required “uniform”.  These sheep were being shown two weeks ago in Garmisch, Bavaria. 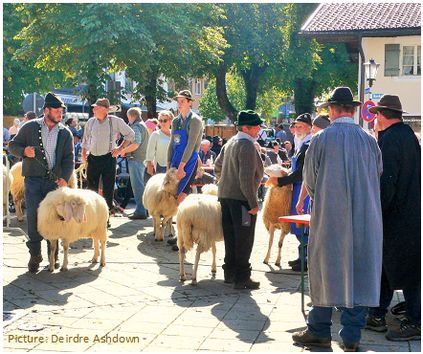 In the UK we don’t have a national dress as such. Travelling around the shows I soon discovered that, underneath the regulation smart clean white coat worn in the show ring, there were regional styles that the well dressed show person would wear.  This was propagated and adopted at a young age. Most of the small shows would have a ‘Young Handlers’ class, or one for children to show an animal they had supposedly cared for and prepared themselves. If these children were not wearing a small white coat, then you may see them in check shirt and, perhaps, a tweedy style waistcoat and tie. If the norm for that area was a flat cap, or a trilby, then some would be wearing the appropriate hat as well. Judging by the pictures from Garmisch, the thing there is to wear the traditional Tyrolean hat.

Its interesting to compare the differing approaches that judges take to these children’s classes. For some it’s purely about the animal, whilst others will take in to account the knowledge and skills that the child has displayed, and how they handle the creature they are showing. Its definitely a case of the best animal may not always be placed first.

My reason for being at the Richmond show was to meet up with friends and acquaintances.  Much of the social aspect of any show takes place at the ringside as people gather, not only to see how the animals they have an interest in do, but also to see how good the opposition are.  Others will be identifying future breeding stock  and bloodlines that they may like to buy into.  Some individuals and groups will stake claim to a piece of the ringside and set up camp with chairs, bags, umbrellas or parasols, and assorted sundry paraphernalia.  A most important aspect of this is the breaking of bread and sharing of food. As basic a social activity as you could find.

An English friend visiting from Hungry, provided a bacon butty.  A real Hungarian, who was showing on the day, provided some of Loseley Hall’s own ice cream from a nearby stand.  Also there was the associate editor / specialist vetinary advisor for some of the dog books I’ve been associated with over the last couple of decades.  Being Austrian, the torte that he had made and brought was absolutely glorious.  At the end of the afternoon I didn’t have to take an extra slice away with me, but with a 28 mile bicycle ride home I certainly chose to.   I was even able to exchange a few words with a breeder I had last spoken to a dozen or so years ago on the day when one of his dogs became the Crufts Supreme Champion.

As I wandered around the showground there was the opportunity to see examples of the various breeds of dog being shown on the day.  On this first day of the show it was breeds from the toy and the hound groups.  My favourite dog of the day was a lovely Otter Hound which, annoyingly, I failed to photograph.

Obviously, no one wants to go back to the days of hunting otters with dogs, but this doesn’t mean that you can’t admire a beautiful animal.  For show people it is the breed points and the Kennel Club standard for the dog that is important.  However, when you’re walking across a show field sometimes an animal just has something about it, perhaps the way it walks or shows its character, that attracts your attention.   That was what happened with this otter hound. 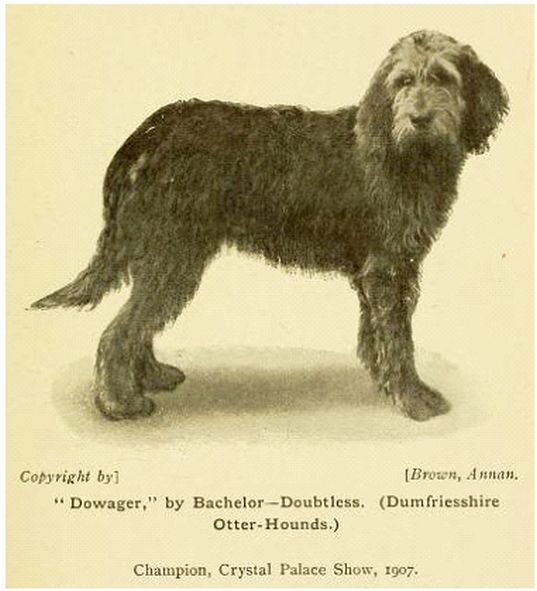 A few months ago I was stood in a field loking at some white rhinos. This otter hound was actually far rarer. With only a few hundred worldwide, the otter hound is twice as rare as the giant panda. As this year’s Overground Festival reintroduced a dog show of sorts, to Crystal Palace, it provides an excuse to show this champion otter hound from 1907.

Those of you who have come across my writings elsewhere, will know that I’m a big fan of the woodcuts and illustrations of  C F Tunnicliffe. One of my earliest encounters with his work was his illustrations for Tarka the Otter by Henry Williamson.  As a 10 year old the book was quite a dark experience and cemented within me a view on the hunting of animals with dogs, that has never changed.  Unfortunately I haven’t been able to gain permission to reproduce any of these images.

Recently I was given a copy of: ‘Charles Tunnicliffe: Prints : a Catalogue Raisonné’.

This is a fantastic publication produced by the Royal Academy of Arts. The quality of the paper, the printing, and the binding are all superb. The amount of illustration per pound, whether by weight or by cost, makes this book outstanding value as well.

This blog was meant to detail my ride home from the Richmond Show along the River Wey Navigation. That will now be a seperate blog.

2 thoughts on “The Comforting Hug of the Familiar”