Mark Beaumont, who has cycled 18000 miles around the world not once, but twice, is to blame for this particular blog.   Most recently, this serial circumnavigator completed the journey in less than 80 days, knocking more than 100 days off the previous record which he himself had set.

When you’ve done all of that, I guess new challenges have a lot to live up to; so attempting to beat one of the longest standing records in world cycling must seem a natural thing to do. It is the world 1 hour record…  for the penny farthing.  It was set in 1886 by a Mr A Rowe who achieved a distance of 22miles and 150 yards.

So how did Beaumont do? He managed to ride 21 miles and 1,619 yards In 1 hour which was a new British record, Unfortunately this was just under one mile short of the record of 1886.

This 15 minute Global Cycling Network video gives a background to the record attempt and a quick tutorial on how to ride a penny farthing. 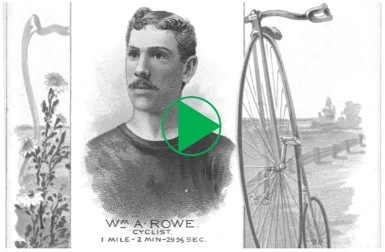 Shortly after that the ITV cycling commentator @nedboulting tweated this picture  of Paris cargo-bike riders prepaing to race.

Coincidentally, at that time I had been searching for my copy of ‘The Ingenious Mr. Pederson’ by David Evans, which contains this picture of a 4 person Pedersen bike – one of the riders being Mr. Pederson himself.

That started me thinking. The idea for an Omnium of Oddities was the result

The Omnium is a cycling competition, rather like a heptathlon in athletics, made up of a number of different events from which the competitors gain points. At the end of the competition the overall winner is determined by the points accumulated across all the events.

The standards track racing omnium has been slashed and is a shadow of what it was. So, I thought to myself, why not an omnium built around older designs of bike that test other riding skills as well. The penny farthing one hour race could be included as a sort of blue riband event.  For the other events new records would be set, and stand to be challenged in the future.

Comprising several events, the omnium format also lends itself well to television.  Each race has its own winner and then there is an overall winner.  If the events are spread over several programmes, then each has its high point and natural conclusion with the crowning of individual  race winners, whilst maintaining interest and building to the ultimate series ending through following the progress of the overall leaders.

Traditionally the omnium tested the full ability of a track rider. There were sprints, endurance races, and the need for great awareness and an astute racing brain.  In some races individual riders can gain additional points, so mathematical ability is necessary for them to be able to follow where they are in terms of scoring and position against their competitors.  These days the big screens erected for the spectators’ benefit also help the riders in this regard.

So what form would the Omnium of Oddities take?

Let’s start with the the delivery or Cargo Bikes.   In many inner cities around the world cargo bikes make a significant contribution to the total goods delivered reducing the number of motor vehicles and resulting congestion and resulting pollution. The kind of tasks bikes and riders have to perform in this kind of work lends itself to some kind of skills test based around an obstacle course. 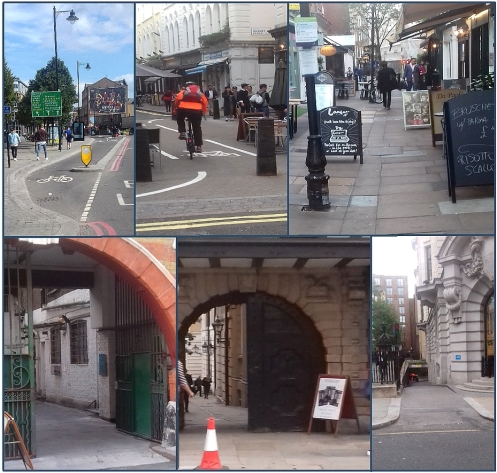 I envisaged something that combined to all the best parts of a dog agility course, a downhill skiing slalom course, and a pony show jumping course.   Each obstacle or ‘jump’ would reflect some aspect of the challenges that were being encountered by the Parisian delivery rider of the early 20th Century as well as by the riders of today.

Scoring could be similar to that of show jumping.  Besides the time taken, riders would be awarded four fault points for each obstacle that they failed to negotiate cleanly.  If a rider was preparing for an obstacle, but before starting it decided to circle and try for a better approach, then this could be classed as a ‘refusal’ and three fault points awarded.  In the omnium results of each race are turned into points, so the show jumping scoring system would integrate very easily into it.

The obstacles may include:

These obstacles, put in the right order with some perhaps attempted in each direction, would create a test of the rider’s handling skills.  Going against the clock adds tension and promotes crowd involvement right from the get go. Interestingly, the aforementioned Mr. Beaumont has both skied and show jumped, so one might think he would be a natural at this.

Tricycle racing is not new and, indeed, the Tricycle Association are very active in promoting a number of events.

My first experience riding a racing tricycle, many years ago now, ended in a close encounter with a wet ditch and then a blackthorn hedge.  Steering and cornering were dark arts I never really mastered, and I quickly decided that trikes were not for me – until I discovered recumbents trikes that is.   What era of trike technology used in the Omnium of Oddities would have to be decided on. For example, it could be a single fixed rear axle; split axles with drive to one wheel only, or a hi-tech arrangement with some kind of differential arrangement.  As I would not wish to suggest modern tricycles are in any way an oddity, I would propose replicating a pre-war design, which may not look so different from the machines of today but would embrace older technology and riding challenges.

As the riders cornering skills contribute so much to tricycling success, a criterium type course may suit this event. Rather than a flat out track race. 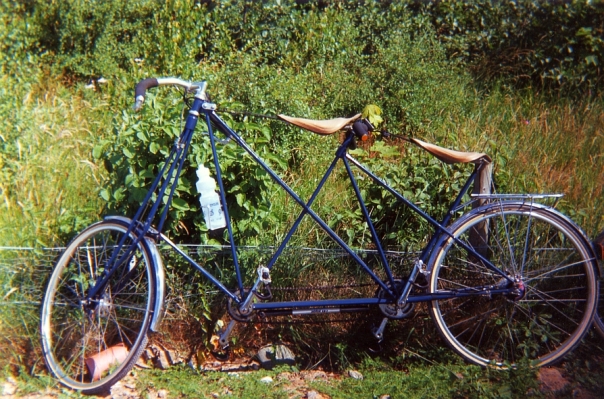 As more people have discovered a pleasures of riding a Pedersen bicycle with its hammock mount saddle, over the last 40 years a number of independent frame makers have reproduced the design.  This tandem Pedersen was being ridden in a group ride I participated in. From memory it was about 1990.  I’m not aware of any ridable quad Pedersons like the one in the picture below.  There are however, frame builders who could manufacture some for a competition of this type.

If the number of participants in the Omnium of Oddities was a multiple of four, then the riders could be split up into teams decided by the drawing of lots.  Each team to be given, say, 10 minutes to set up the seating, decide what order they are going to be on the four seater Pederson bike, and 10 minutes to practice riding together.  This process would add a degree of randomness to the event, make it more interesting and the outcome unpredictable.  The riders would share the points awarded to each bike at the end of the event.  There would be scope for this to be some kind of pursuit type event, a flying lap, or a kilo ride.

It would introduce another bike type and be a test of strength and teamwork as opposed to the bike handling skills required by the previously outlined events.  Perhaps adaptability of riding style may prove to be more beneficial here than pure power.

If standard single Pederson cycles were also used then there is scope to introduce a Kieran or, by drawing lots to pair riders up,  a mini Madison with all the madness of a standard Madison.

Depending on the budget to build new replica machines, or there being sufficient available to race, then a range of other events could be added. Personally I would love to see a velocipede race. 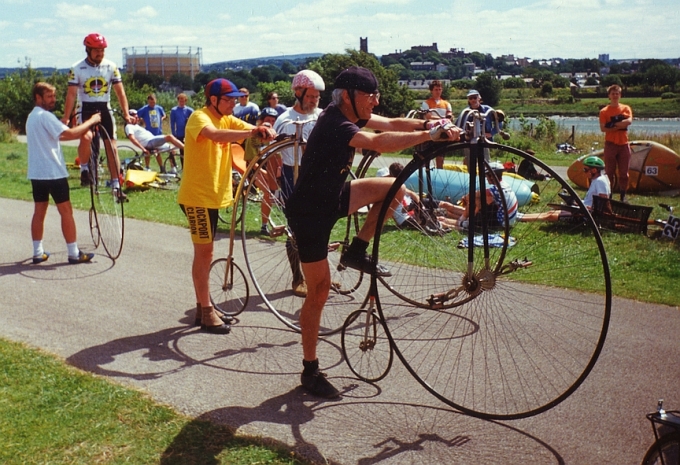 If the Omnium of Oddities was to incorporate a penny farthing hour race when any record attempts could be made, then perhaps that should be the first event whilst riders are fresh.  The penny farthing could bookend the whole competition if the last event was a penny farthing devil, or elimination race.  Always an enjoyable and entertaining race, especially if a devil, with trident to tap the riders with, is on the track.

Whilst they may easily be classed as oddities, I have not including any recumbents as they merit there own place in a separate human powered vehicle story. At least two recumbent designs feature in my bicycle bucket list though.  More details from the  British Human Power Club.

So a race schedule which could, with explanations of the bikes being used and other nuggets of cycling history, easily make a four-part TV series.

There you have it, an Omnium of Oddities that could be fitted in to a three day cycling festival or be a TV programme and competition.