I love riding and walking by canals and rivers, Not only is there the whole water thing going on, but life somehow seems calmer. The natural environment and ecosystems around these watery routes have so much to offer. It was perfectly natural therefore, that when I visited the Richmond Championship Dog Show at the beginning of September, I should choose to cycle home along the River Wey Navigation and River Thames.

Just in case you are wondering, a navigation is a river or other natural water feature that has been developed so that it can be navigable by boat or barge. They differs from canals, which are man made rather than the adaption of a natural water course.

Opened in 1653, the Wey is the second oldest navigation in the UK.  This was a full century before the commencement of what is sometimes called the canal age, and three years before the Great Fire of London. Following that conflagration the Wey Navigation played a major role in the rebuilding of the city. It became the main supply route for building timber from the forests of Surrey and Hampshire, and also for chalk and Guildford stone.

Since 1964 it has been owned and managed by the National Trust.  This has meant that much of the character has remained.

Leaving Losely Hall, site of the show, I headed for Guildford and was able join the Wey Navigation at the point, about a mile short of the town centre, where it is crossed by the North Downs way. Accessing it by means of Ferry Lane gives an indication of the past, although there is now a foot bridge for the pilgrims and others on the trail to Canterbury. 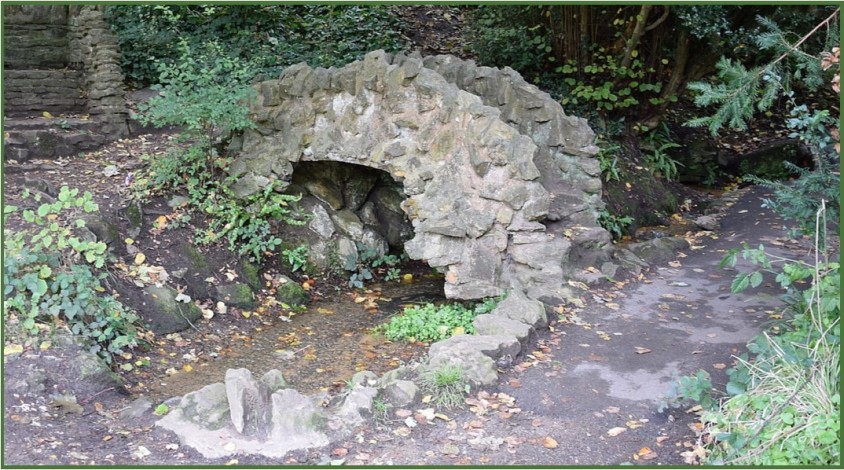 I have never taken the time to try and understood the Victorian fixation with faux grottos – but there is one where a freshwater spring comes out of the ground at the end of Ferry Lane; where this view of the Wey is also found. 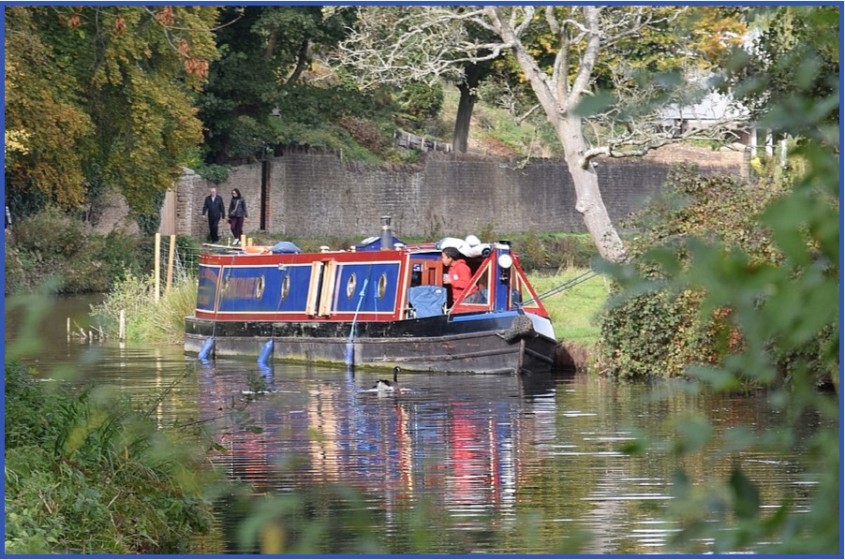 A few yards on, and the outskirts of Guildford centre can be seen on the hillside across the water meadows.   There are sluices in the side of the navigation that can be opened to release water onto these meadows.  Originally, they were developed with channels and drains so that as they flooded the water and nutrient rich silt would flood evenly across them.

After a dry winter, water meadows would be deliberately flooded to help the ground warm in the spring and promote plant growth. Traditionally they would be used to produce hay and not grazed until after Lammas. This also promoted the growth of wild flowers and other plants that made up the water meadow ecosystems. Sadly, the drive for productivity in the second half of the 20th Century resulted in a large numbers of these meadows being drained and ‘improved’.

As a teenager I loved cutting grass for hay on nearby water meadows. They had not been ploughed in living memory, if ever, and the sward was full of wildflowers, herbs and vetches. The smell of that hay was always fantastic and in the middle of winter would still smell of summer. If you are interested in conserving or restoring water meadows, visit the Floodplain Meadow Partnership website

These meadows by the Wey were part of the estate of Shalford House. This was demolished in 1968, thereby sharing the fate that befell so many country houses in the 1950s and 60s.  When these houses were built the land around them would be landscaped and often planted with exotic or unusual, for that location, species of tree.  Half a century or more after the buildings disapeared, it is those trees, or those seeded from them, that survive as a testament of what has happened within that landscape. 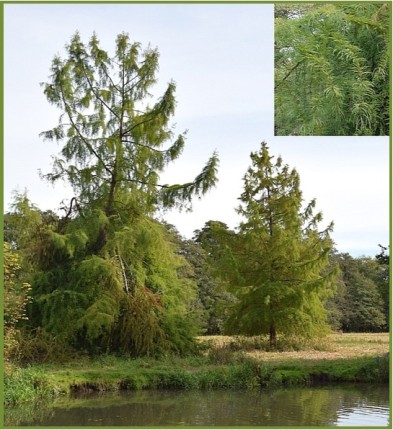 All this, and we are still at the bottom of Ferry Lane.   The ride into Guildford along the South Wey Path took just a few minutes on a good surface and I was soon at Millmead Lock set in a sort of riverside park complete with attractive footbridges over weirs and spillways. 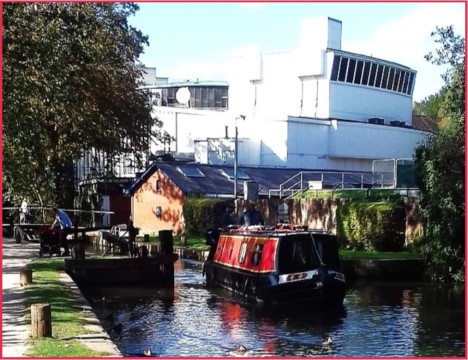 At Millmead lock the attractive features of the navigation are overshadowed by more modern structures that seem to have been erected with little consideration of the environment in which they sit.  A few yards further along there is a repeat of this with Town Mill which is dominated by a modernist building that houses a department store, beyond which lies Town Bridge.

Beyond the Town Bridge, across the river from the path I was riding on, was the town wharf.  A wooden goods shed, gibbet crane and sculpture of a bargee or a wharfinger may have been a representation of times past, but did nothing to hide the mass of concrete.

Unfortunately I was not able to tarry and explore Guildford properly – that will have to wait for another visit. Moving along the riverside path there was little of note with the buildings being mostly commercial and either modern, or restored older properties but with little of the original left to commend them.  To be fair though this did appear to be the commercial and industrial part of town.  An exception to this was the old electricity works which has been converted into a music and events venue.

A few minutes riding and the path passes opposite Dapdune Wharf which can be accessed by means of an overbridge.  When I was walking this section of the Wey on another occasion I discovered that the café and toilets can be used without having to pay to enter the wharf itself, which is the National Trust’s visitor centre for the Navigation.  It has at times been a boat, or barge, building yard as well as a commercial wharf. 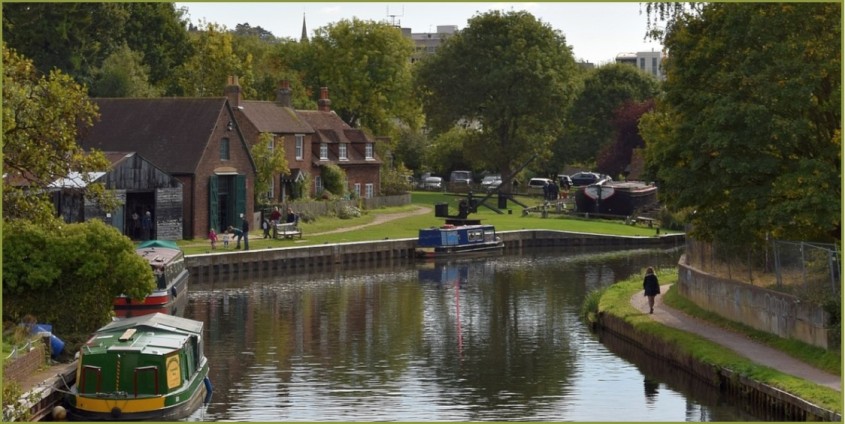 Past the footbridge are a few sculptures, presumably to soften the impact of the adjacent industrial estate and steel fencing. This particular work represents a grain of pollen. Others were stainless steel outlines of fish atop of rusting poles, and chairs cut from tree trunks and set amongst some new tree planting.  Guildford Public Art webpage gives more details.

This was where I also gained my only glimpse of Guildford Cathedral, part framed by that 8ft high fencing.

Continuing-on brought an encounter with the A3 and I was soon at Stoke Mill which is where Guildford is left behind and the proper country section of the ride begins.

The rest of the Journey will have to wait for another day.  If you are interested in exploring the Wey Navigation, then some walking information is available on the National Trust website.  You may like to buy this book by one of this country’s more accomplished walkers –  John Merrill.  It is available from the author’s website and some book retailers. 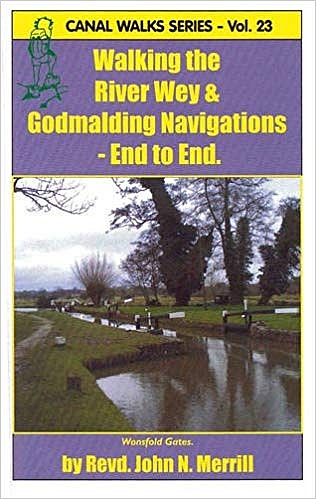