Last Wednesday evening I attended a lecturette on Adventure Cycling by Barry Godin. It was hosted by Cadence Performance Centre at Crystal Palace. All it cost was £5.00 and there was a free beer and sweets thrown in as well.

Barry Godin is not only a keen bikepacking adventurer, but an enthusiastic advocate for the sport. He spends a lot of his spare time cycling many of the remoter parts of the UK, as well as trips to foreign parts.  We were treated to an entertaining evening that explained what bike packing is, and what sort of kit you need to bikepack,  Adventure cycling is what we used to call cycle camping, but using modern bikes that are better equipped and adapted for more rugged terrains. 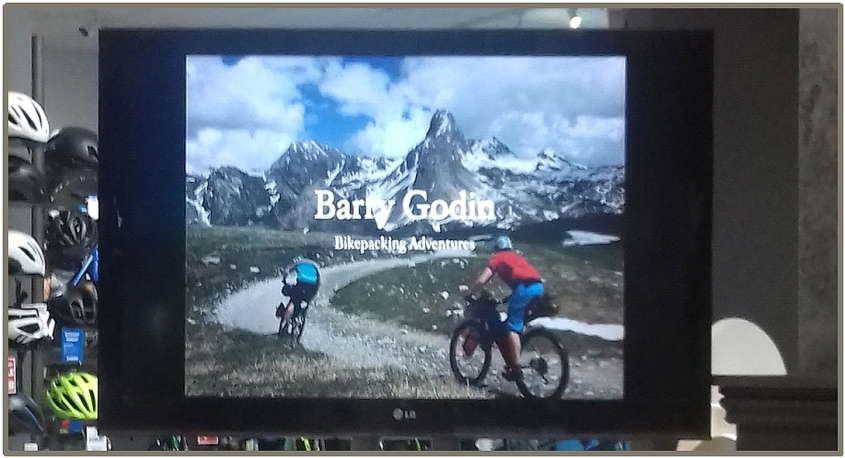 At the end of this blog I’ll put some links to Barry’s social media and video sites.  The latter are well worth a visit for, as we discovered during the evening, he is a keen film maker. Perhaps you would be good enough to follow this blog though before leaving.

It was as much the nature of the evening and what it wasn’t, as much as the content and delivery style, that made it enjoyable.

It was presented by an athlete; a former extreme mountain biker. He was not however, some imperious athlete whose maleness was so alpha that even the most dominant of silverbacks would quail in his presence. It was not a celebration of exotica – it included video of trips to Morocco and the Alps; but rides across Devon, Wiltshire and Scotland were talked of with the same enthusiasm.

During the evening we were shown the kit that Barry takes on his trips and a demonstration of how it all fits on his bike. This included how he can pack enough food to be self-supporting for two or three weeks. It wasn’t an exhibition of possessions – whilst for some items he may have suggested purchasing the best you could afford; for others he talked about things that people had made for themselves, or purchased from ebay. At least when it came to his underwear bag he coyly refrained from displaying the contents.  He had prepared and distributed booklets which not only gave his kit list, but the reason for including each item. 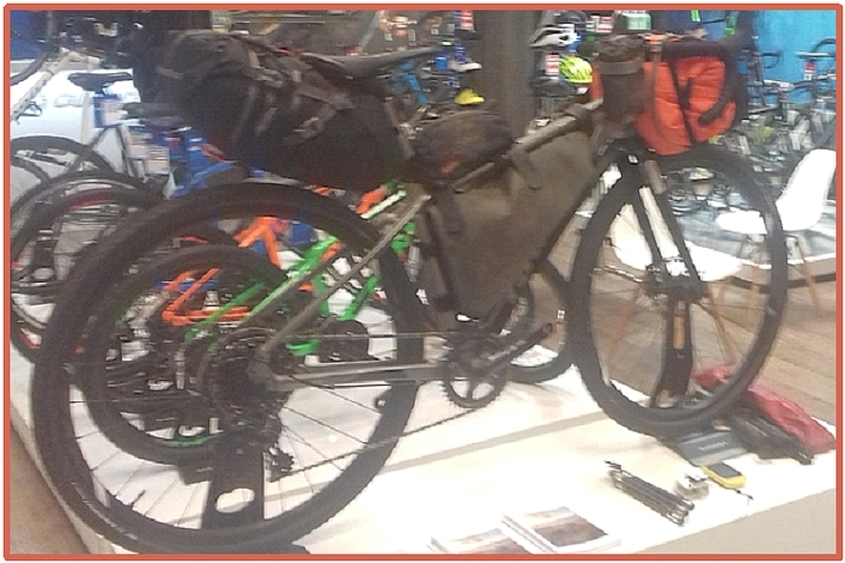 The subject of wild camping was discussed and especially the limitations on where you can legally camp in England and Wales.  The impression I gained from Barry was that he’d not had a problem in this regard, but that he did choose where he camped with a degree of sensitivity.

If you want some help with this try visiting the wild camping page of campsites.co.uk. There are other websites that are aimed at the novice wild camper that giver further advice.  My first trip was with an experienced wild camper who, before we set off, reduced my kit by a drastic amount. Lesson 1 learnt. (I still tend to walk or ride with too much, so perhaps it wasn’t lesson learnt).

I don’t think the words passed his lips, but what he demonstrated was that adventure cycling is accessible to all whatever the budget or level of cycling ability. What I liked was some of the philosophy behind the trips that he makes.

He introduced the concept of mini adventures. For him, the inspiration for these can perhaps be seeing a feature on a map, or an interesting picture of a place.

These are rides that can be made whenever one has two or three days available. This was illustrated with details of a trip made on the Kennet and Avon canal in Southern England. In this case he had camped actually on the side of the canal itself. Like myself, Barry is enthusiastic about the cycling possibilities offered by the UKs canal network.

In the past I have had various flirtations with the world of inland waterways.  Knowing that the water beneath the hull probably won’t come above your waist, and that dry land is only a few centimetres away, means that any excitement scores very low on the frisson scale of thrillingness.  Cycling the canals can be like that too. Yesterday I cycled 20 miles of the Lee navigation and, according to my satnav, gained less than 30 metres in height.

This does not mean that the canal network is without interest or not worth riding. You won’t get climbs (especially if you hitch a lift through any tunnels that a canal passes through), cliff-edge rides or technical descents. What you will get are well maintained traffic-free tracks across the length and breadth of the UK.

When the first railways were built they often followed the route of a canal so that they could compete for its trade.  As a result, many of the canals are easily accessed by rail at various points along their route, making linear rides far more practicable.  They give great access to the countryside although, on a sunny Sunday some canal paths become pretty congested with walkers, runners, people fishing, dogs, and parts of canal boat removed to facilitate repairs.

If there is a canalside café with a lot of bikes locked up outside, it usually means that the cake is worth stopping for.

Barry shared with us how he prepares for his mini adventures. This includes studying maps to find routes and places of interest, and then downloading the routes to his phone and bicycle satnav. The various aps that he uses can be found from his social media pages.  Attention to detail like this maximises the time riding and enjoying the environment through which he is passing. Listening to him, it is clear that maximising the time for film making is also important.  Just a warning – if you start watching his videos, an evening can quickly disappear.

I am so grateful that I went to a school where the geography master was a former RAF navigator with an obsessive interest in maps. He was a champion of Ordnance Survey and expected us to not only be able to identify the features on a map, but to understand the implications of those features. Lesson one was being given a map and told to identify which footpath you would probably want to wear wellington boots whilst walking it.  He was also a keen amateur meteorologist, but his predictions were best treated with scepticism.  50 years on, I still look at a map and try and visualise what the terrain may look like.  Google earth and satnavs are no substitute – in extremis in the middle of nowhere, a map doesn’t have a battery to go flat.

If you want to get to grips with maps, last week Ordnance survey published this book which may help you to hone your skills. 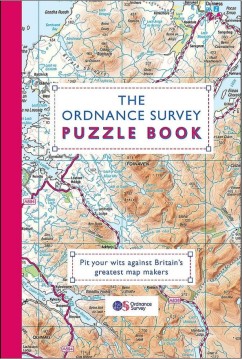 For many of us, our working life includes accruing CPD points to show that we are keeping our knowledge and expertise up to date.  A few years ago I decided I should apply the same to some other aspects of life. This may have been influenced by being employed as a health and safety advisor, but included the purchase and study of a couple of Cicerone guides – Map and Compass; and, Mountain Weather. 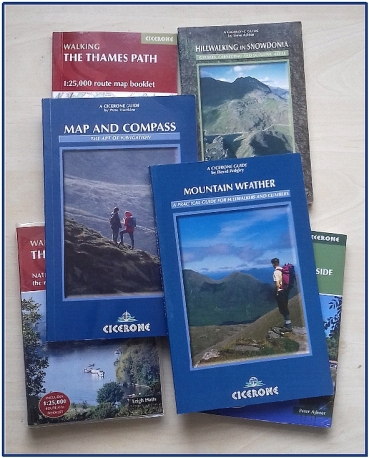 Even just writing about this gives me a yearning for the intellectual challenge – when the weather gets really wintery then I think a couple of days in the hills with map and compass are called for.

As promised, some social media links for Barry Godin:

Yesterday I left the River Lee at Stratford as the setting sun was lighting-up the Lee Valley Velopark.