During a visit to the recent Cycle Show at the NEC, at one stand I was taken back to the days of the eighties and nineties when bicycle design and evolution was being driven by world class innovators and designers.  Bicycles from the past were examined again by designers who were looking back at other eras, for solutions that could be adapted to provide an answer to contemporary design hurdles. At the same time, riders were keen to explore new machines and styles of riding.

This loft-find Arthur Waller ‘Kingsland’ bike, currently awaiting conservation work at Blue Door Bicycles, has twin tapering tubes. replacing the seat tube. to facilitate a shorter wheelbase design for hill climbing. Designed at the end of the 1940’s, it typifies the kind of details that were providing inspiration.

This new wave of interest developed a subsidiary culture, epitomised by the launch of the Jim McGurn edited Bike Culture Quarterly and, later in the nineties, Recumbent UK.

Perhaps the best-known bikes from that era are Graham Obree’s ‘Old Faithful’, famously incorporating washing machine parts, with which he won the 1 hour record; and the Mike Burrows designed Lotus superbikes with which Chris Boardman won an Olympic gold medal and later also took the hour record.  When the hour record bikes from Merckx in 1972 to Boardman in 1996 are looked at, this evolution in design, materials and riding position can clearly be seen. I’ve omitted the bikes used by Miguel Indurain and Tony Rominger. 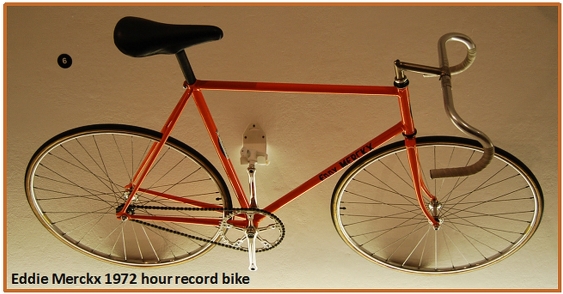 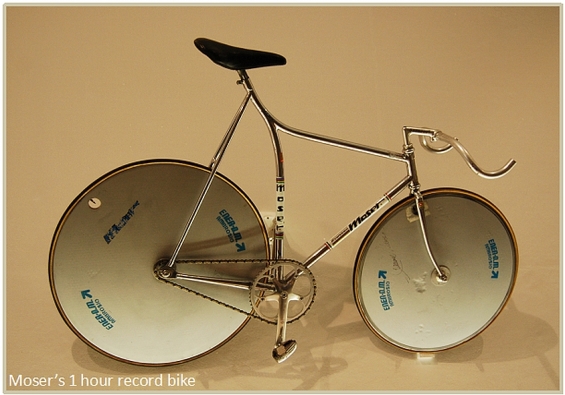 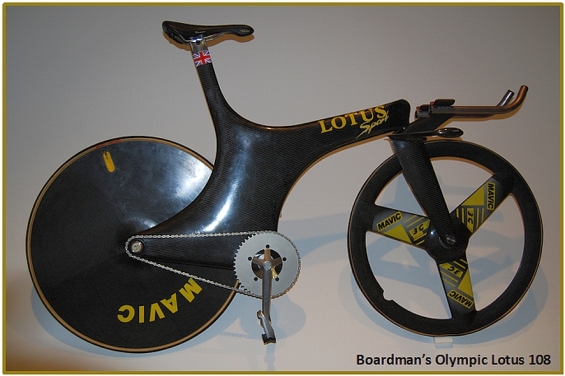 The story of Graham Obree and his bikes can be found in the film, ‘The Flying Scotsman’, based on the book with which it shares a title.  It really is the story of a slightly eccentric inventor working in his shed. Boardman’s contrasting story, as a rider and director of British Cycling, can be found in his autobiography. He continues to be an innovator with the newly opened Boardman Performance Centre at the cutting edge of developing rider performance.

In 1994 the sport’s ruling body, the UCI, outlawed the ski-tuck position used by Obree and praying mantis position used by Moser. This led to riders using the superman position with the arms out in front – illustrated on the cover of Obree’s book above.  In 1997 they changed the rules so that bikes once again had to be similar to that used by Merckx.  This brought an end to developments like the monoblade front “fork”, examples of which had been produced by Burrows for both the Obree and Boardman bikes as well as his own ‘Ratcatcher’ recumbent. Innovation was now firmly back in the realms of smaller independent companies or designers, and keen amateurs. 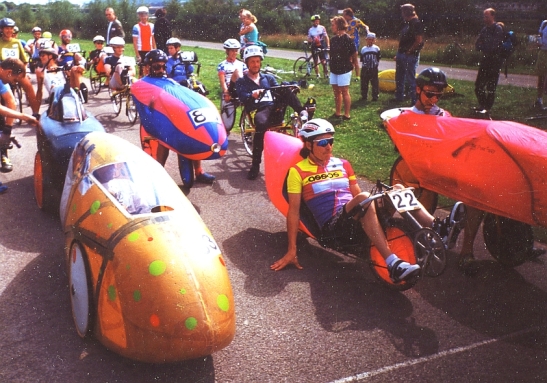 These bikes were taken to extremes of design and performance under the auspices of the British Human Power Club, who produced a booklet on how to build a recumbent for very few pounds. A similar book can still be purchased today from their website.

This was a challenge taken on by many amateurs, some adapting proprietary bikes such as this Moulton based machine photographed around 1993.

Artisan frame builders were re-engineering designs from the past – like the Suttons building new Pedersen based on original designs, in their midlands engineering works.  When Dr Alex Moulton brought out the space frame design, which to my eyes had at least an echo of the Pedersen; oh, did I want a Moulton Speed S with its polished metal frame.

My favourite recumbent bike to ride from that the era was the Kingcycle. As someone who never came to terms with under-seat steering, my brain could cope with the handlebars in a semi traditional position. Although I never owned one of my own, I did get to ride one from time to time. As somebody with a large frontal area, I loved the aerodynamic efficiency that came from riding in a recumbent position.  When the front fairing and rear box were fitted, the air resistance was reduced even further.  It may have been purely psychological, but riding a Kingcycle fully fitted out like this gave a sense of having more presence on the road.

Unfortunately, I have lost my photo albums and negatives from this period, so some of these pictures are from the scrap pile which did survive.  The following picture is of four Kingcycles, with contrasting levels of fairing. From about 1992, they show what good use could be made of a carpark when supermarkets were closed all day on a Sunday.

I spent one memorable evening during that period sitting, with about 40 other people, in a room listening to, first, Alex Moulton, and then Mike Burrows, talk about bike design. It was a convivial evening that went well beyond the allotted time. The question time at the end really was a case of two great engineers and bicycle designers, of different generations, openly sharing with, and inspiring, potential designers, riders and politicians of the next.

Various cargo and multi-use bike platforms were available particularly from European manufacturers. It is in recent years, however, that these have become more popular in the UK. Delivery services using cargo bikes are available in major cities now, and can be booked by app rather like an uber cab.  I regularly see a Tern ebike, similar to the one in this picture but with child seats bolted to the deck, being used to take two young children to nursery. 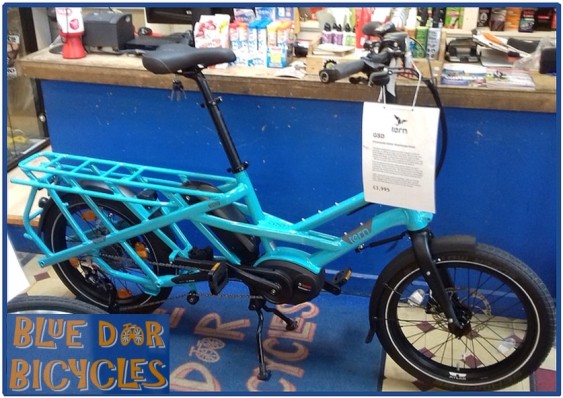 The use this Surly was being put to, as seen at this year’s Cycle Show, appealed a little more.

Back to the last century. With new materials and equipment becoming available, a whole new range of design concept became realisable. Some designers were exploring recumbents with a tricycle concept.

John Bradshaw (one of the founders of Cyclefest) and his Team Martin even appeared on the BBC flagship science programme, ‘Tomorrows World’. Their trike, the Avant, had a single front wheel with hub centred steering. Uniquely (Flevobike fans might disagree) it had a pivot mid-way along it so that the front part, carrying the rider, could bank side to side separately to the load carrying area behind.  This allowed the rider to aid the steering by leaning into corners like a traditional bike.

My pictures of this recumbent trike are gone, but I do at least have the memory of one evening, whilst staying with John, riding the Avant around in the road outside his house. At the risk of being indiscrete, his garage was like my idea of a mancave, before mancaves were known as that.  A Morgan car – Canadian spec, vintage Arial motorcycles, a 19th Century ordinary (penny farthing), a Kingcycle and a Pedersen; are just some of the items I recall. A rather special mancave me thinks.

Some other recumbent trike builders experimented with a traditional trike layout but with rear-wheel steering; perhaps the most advanced being the Sidewinder with its differential and twin disk brakes. This layout never really worked and the ‘tadpole’ shape with two front and one rear wheel became the norm.

In the more traditional trike world some designers were also experimenting with this format for touring trikes. From memory Derek Shackles was producing a model with an Ackermann type steering geometry. 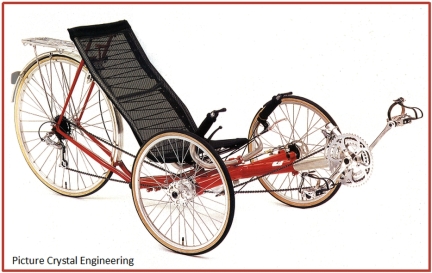 Whilst other designs such as the AnthroTech or Rubicon were available, the main designs I saw around the UK at that time were the Greenspeed imported from Australia, the Mike Burrows  ‘Windcheetah’, and the Peter Ross/Crystal Engineering ‘Trice’.  The picture below is a Windcheetah being piloted by someone who follows this blog.

The Windcheetah and the Rubicon had the rear wheel fixed on one side only and joystick style steering and controls. Predominantly these were built for speed with fully enclosed versions of the Windcheetah being seen on the racetrack.  Another had a small jet engine attached to it!

The Greenspeed and Trice were designed to be more utilitarian and designed to be fitted with rear racks. The Trice could even be supplied with a rear box as an accessory item. To be fair Greenspeed went on to produce the faster ‘Aerospeed’. Over the last couple of decades, in some cases driven by the growth in paracycling competition, design and performance of the recumbent trike has developed rapidly.

So, what was it at the Cycle Show that brought these memories back? It was the ICE or Inspired Cycle Engineering stand.  A brilliant range of recumbent trikes but with some tiny part of the DNA of Peter Ross’ Trice still visible.

Besides building the Trice in the UK, deals were negotiated for it to produced under licence in the USA and China. Ross was also working on designs for a multi person pedal propelled vehicle.

With Peter wanting to retire, in 1998 Inspired Cycle Engineering, or ICE, was established By Neil Selwood and Chris Parker and bought the rights to the Peter Ross designs which they then produced.

Leap forward 20 years and WOW.  Forget Britain being the centre of excellence for Formula 1 or the country that gave the Landrover to the world.  The human powered equivalent of both of these can be found in Cornwall and the trikes produced by ICE.  If you watched any of the cycling from the recent Invictus Games in Australia, you will have seen not only inspiring racing and sportsmanship, but ICE trikes being raced “full gas”.

Many machines designed for performance are ugly, whilst other become objects of pure beauty. Quite definitely in this latter category is the ICE VTX Black.  And don’t be thinking that it’s all fur coat no performance.  It was the winner of the Multi-Track class at the World HPV Championships which, this year, were held in Kent. That makes it the fastest trike in the world this year.

ICE also make trikes for touring or general poodling about. For that you may want to look at their Adventure range. The bike in their range I was drawn to (and subsequently been on their website to spec and cost), was the Full Fat.

When I sat on the Full Fat it was so comfortable, forget riding it – I want one to replace my favourite chair. It also brought a smile to my face; it made me grin.  Oh yeah, it also holds an amazing record.  Five years ago, Maria Leijerstam rode an early Full Fat from the edge of the Antarctic continent to the South Pole in 10 days, becoming the first person ever to make that journey entirely by pedal power. That makes it the first, only, and fastest bike to be used in achieving that feat – a sort of triple record in one. 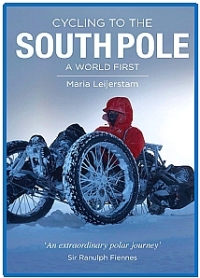 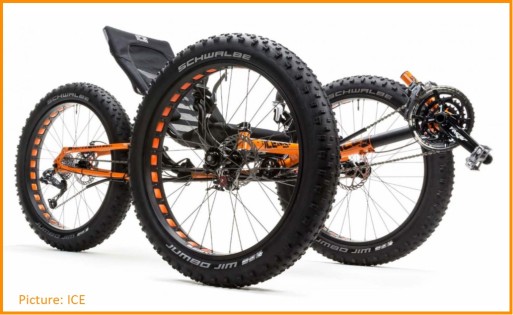 If you hadn’t already guessed it, the Full Fat is high up on my bicycling bucket list.  Perhaps a trip to Cornwall and a test ride is on the cards.  How would I get one home do I hear you ask? ICE trikes fold up niftier than your average golf trolley.

Before you go, it would be appreciated if you ‘liked’ this page. It would be brilliant if you shared it on your social media. You could become a shining star in my digital firmament by choosing to ‘Follow’ me. Many thanks, Peter.