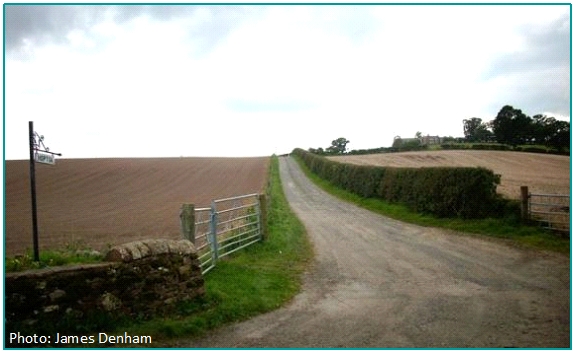 The clocks have gone back, All Hallowstide is past, the Dorset Horn sheep are having their autumn-born lambs and Remembrance Sunday is almost upon us.  I no longer work on the land, but that sense of the need to prepare for Winter remains.

I can happily spend an hour preparing walking boots for winter. These are mine – with broken lace fixing and split stitching the middle pair are really past it – but old friends I turn to for the comfort of the familiar.

Boots don’t really need too much care and routinely I tend to use what is to hand. This might be ordinary brown shoe polish, or rubbing some of the saddle treatment, that I use on a leather bicycle saddle, into the stitch lines of the boot. In the Autumn I tend to use Nikwax Fabric & Leather Proofer as it does its job without softening the leather too much, which would lead to the boot losing its form. It can be sponged on and worked into the stitching. I also concentrate on the lace fixings as these can oxidise and become brittle.

Being a creature of habit, I tend to wear the same style of outer shell coat all the time when I’m walking. The newer ones are fine, but some of the older patched ones, which I wear if I think a coat is likely to become scuffed up, have become far less water repellent.  These I wash, and then use ‘Tech Wash’ to add water repellant quallities. This is also a good time to make sure any patches are still sound.

Aging joints mean that I, and some of those around me, use walking poles especially if our route involves significant climbs and descents. Somehow we seem to have collected more poles than we have hands to hold them. This time of year I disassemble them to check they’re clean and dry and working properly.  They then get moved indoors so that no condensation forms within them as this would lead to the insides of the tubes oxidising.  As the adjusters in most walking pole us friction to maintain a height setting, don’t be tempted to lubricate them as this will lose the friction.

In summer we tend to have rubber feet to slide over the tips of the poles when walking on a hard surface. This is to prevent excessive wear or, if being honest, to avoid the annoying tap tap tap sound.  One or two will probably have been lost over the summer so it is a good time to obtain replacements.  Leki have a maintenance guide here: Leki_Care_and_Maintenance.pdf

My bicycles have also had a once over to.  The chains have all been cleaned, checked for wear, and re-lubed with a wet lube – don’t forget to remove the excess. I tend to use dry lube in summer and wet in winter.  I have a good stock of the latter, but as it is used-up I’m purchasing ‘green’ alternatives.

I check all the bearings on each bike. Bearings do wear or become loose. If nothing is done then dust and grit can get in and bring about their early demise.  Knowing how long it has been since they were fitted, or last received attention, is vital in deciding what action to take. If I find a bearing that is loose and I’ve no reason to suspect excessive wear, then I just pinch it up to remove the slack.

On the other hand, my off- road  bike recently had a bit of play in the hub of a wheel that was built well over four years ago, and had been used to travel several thousand miles.  In that case I popped the wheel into Blue Door Bicycles at Crystal Palace for a quick hub service.  In fact the existing bearings were retained but I have the peace of mind of knowing that the hub is back pretty much to as-new condition.

A check over of all the cables on the bikes identified a front mech cable that was beginning to break and fray at the point it was secured to the mechanism itself.  It may have served another few months but I replaced it anyway.  The rest of the cables and the operating levers were all checked. The modern cables don’t really require lubricating but I treat them with a lube containg either silicon or teflon.  This is about protecting the cable from moisture as much as anything else..

One bike needed new brake pads front and rear.  As it is running wheels with carbide impregnated rims, I ordered some pads from my local bike shop to replace the ones I was taking from my stash.  As they seem to have a shine on them, I replace the back pads and use them for a few days until they work well, before changing the fronts. I learnt years ago that some of the large chain cycles shops will still try and sell standard pads to use on a carbide rim. Local independent cycle shops who want to keep you as a customer are invaluable when you want proper help.

The off road tyres had a few cuts and nicks and were getting worn so I decided to replace them with some Shwalbe Rocket Rons. Not necessarily my first choice but available at a very good discount if bought as a pair.

The off-road bike has some basic suspension forks fitted.  The rubber gaitors started coming off the fitting after about 4 years. I found that a spray with silicon spring and autumn stopped that. It doesn’t appear to have had any detrimental effect.  I suggest that you first check for safety and service advice on the manufacturer’s website for the forks you use,  before considering the same.

The touring bike has a Brooks leather saddle. This has saddle cream rubbed into it, including the underneath which can get all sorts of crud splashed-up on to it.  A tin of Brooks own brand saddle cream came with the saddle and that is what I use.

I can get a bit fixated on lights. This time of year I stock up on batteries and check that rechargeable lights or batteries are indeed holding a charge.  When using rechargeable lights or battery packs, I will also have a small traditional battery light to use should the journey last longer than the charge in the battery.  The light are all inter changeable between bikes. 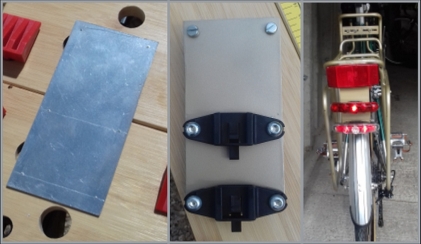 Below are some of the front lights I use.  The Cateye on top illuminates the way ahead whilst the two underneath are focused on the kerb, gutter, ditch; one immediately in front of the bike and one further ahead. Most of the time I just use the light on top but put the others on if cycling in unlit country lanes; or if riding through the night in which case I use the lights in sequence to avoid changing battery packs.

The picture below was taken whilst riding the C2C about 1992 and shows that my desire for plenty of rear lighting is nothing new. Those Ever Readys had been adapted so that the output from a dynamo could be plugged into them. They had voltage regulators and halogen bulbs fitted. Later in the trip we rode out of York early one morning in thick mist with HGVs rushing by.  I was stuck at the back hoping the lights would be seen, and that no vehicles strayed into the bike lane. Everyone was pleased to stay in single file close to the kerb that morning. This was a newish bike at the time; one of the most comfortable to ride I have ever had – eventually it was stolen despite being secured with two D-locks.  I see I had forgotten to swap out the road mudguards before setting off.

The helmet I wear has an integrated rear light and a Lezyne white light on the top.

I quite often make linear rides that use a train to return from the end point. I hate seeing cyclists putting muddy bikes on trains and then sitting on seats still wearing mud splattered clothing.  I carry a Superlite Windshell from Polaris Bikewear with me. It weighs next to nothing, requires almost zero space, and can go over whatever filthy kit I’m wearing.  I also usually have something warm and slightly baggy I can slip over my bottom half.  The small extra effort to carry these around is worth it for the warmth and ease of getting home.

My summer and winter gloves are from the Polaris ‘Really Bright Stuff’ range.  From the same range I have some fluorescent arm warmers, which I tend to wear riding around town at night, to be seen when I’m indicating my intention to turn right, more than for warmth. With gloves I’m not really bothered about padding, but more interested in the protection they give to the palms of the hand if I come off the bike.  If you break a shoulder blade or wrist it is often still possible to ride after a fashion. Flay the skin of the palms of your hands and you can’t hold or touch anything, Oh yeah, you had better hope that there is someone at home to help with your personal care as well!

I’ve also dug out my overshoes for winter use.  These are for warmth on really chilly days as much as for keeping the feet dry. With them I found a skull cap, again from Polaris, which not only stops the the headaches from a frozen skull, but comes well down over the ears as well. I find it fits well under a helmet – but if you don’t wear a helmet it has fluorescent stitching to help your head stand out over the top of any cars that may be obstructing the view of other road users.  It is my must have piece of winter kit. 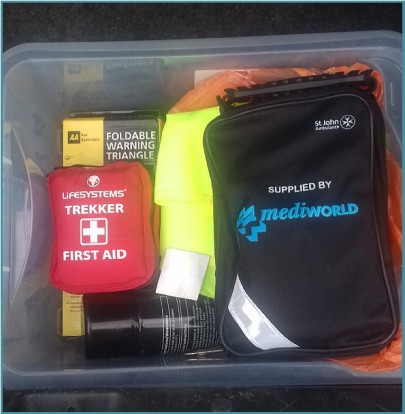 We have various first-aid kits which, depending what we are doing, get taken out with us. Whilst doing the winter prep I also check whether these require restocking, and that nothing in them is too out of date.

My membership of Cycling UK gets renewed about now so part of the Autumn routine is to make sure that happens. I have never needed the third-party insurance or legal advice service that comes with membership – but I wouldn’t want to be without it. 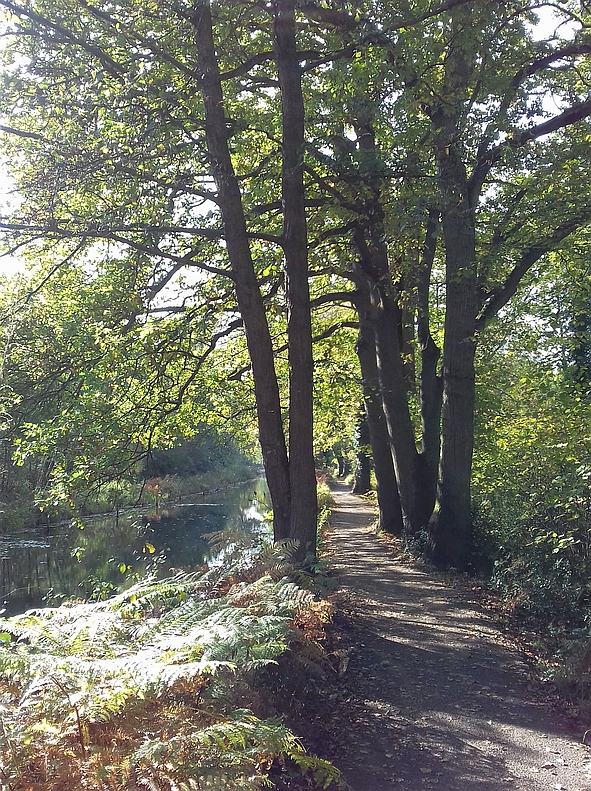