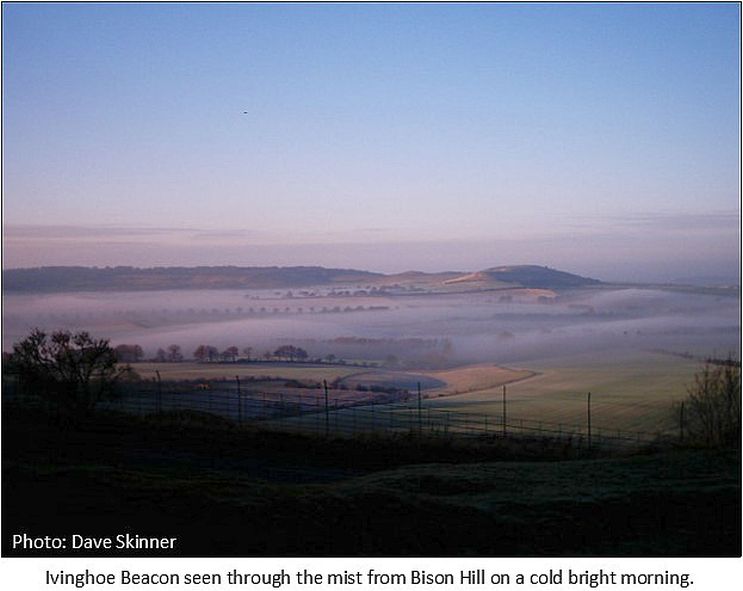 As I set out to write this piece, I expected it to be about some forthcoming trips and how I research them before I make the journey.  I was going to share some of that process with you, including what I had found about one of England’s oldest pathways – the Ridgeway.

Instead, I became diverted and distracted by why my proposed trip would include the Ridgeway. It is a journey that started more than 50 years ago near the Dorsetshire Ridgeway, with a story based around the South Downs Ridgeway. 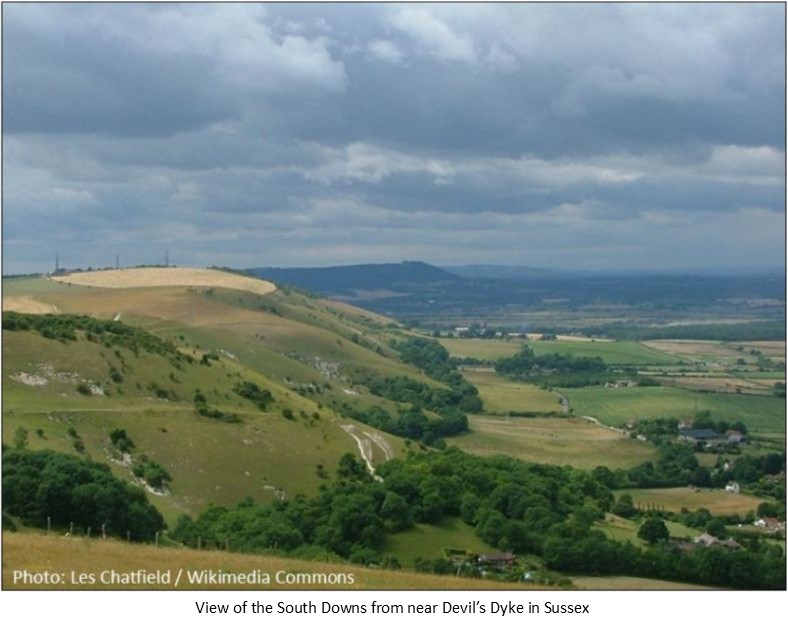 In my first year at secondary school, in what I believe is now called year seven, we were given the book ‘Warrior Scarlet’, by Rosemary Sutcliff, to read.

Set in the Bronze Age, it tells the story of a boy with a crippled arm who trains to become a warrior and dreams of wearing the warriors’ scarlet kilt.  He fails the final wolf-killing test to become a warrior, and is sent to herd sheep. Yes, there is redemption, and eventually he kills the same wolf and does become a warrior. Despite our homework being only to read the first chapter, on that evening I read the whole book from cover to cover.  I thought it an easy read and perhaps more like something I would have read the term before at primary school. I really liked the illustrations by Charles Keeping. Sadly, they do not appear in the modern paperback version with the red cover. 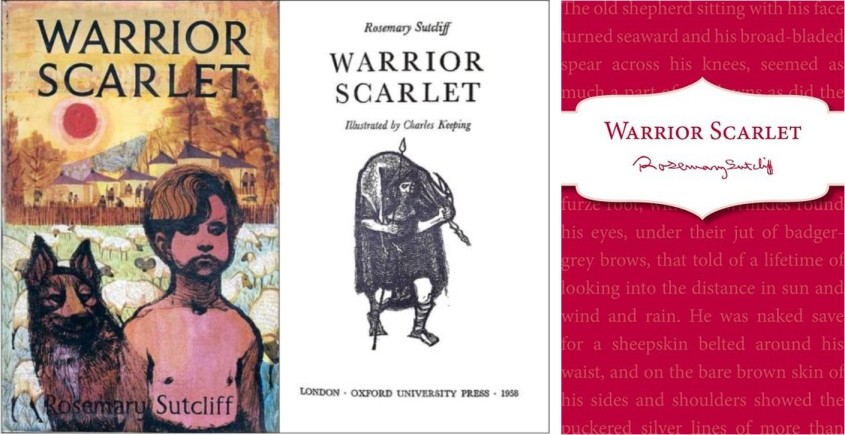 Our English teacher (she refused to recognise the school given title of ‘mistress’) that year was young, liberated and free thinking. If she had been in France, she would no doubt have been on the streets of Paris, for this was the late 1960s.  Two days later there was a bewildered silence in class when we were asked what we thought the first chapter said about the roles of women, different ethnic groups, and disabled people, in bronze-age society.

These were subjects that one did not hear talked about much, if at all, in the West Country of England at that time.  That evening when I asked at home what they meant, the look of horror with which the question was met, was clear indication that these were things not to be discussed.

The next lesson we were asked how these issues were reflected in contemporary society – this to a lad living in a house without radio or television, and who had only been beyond the county boundary a dozen or so times. This type of sociological analysis continued through to the very last page of the book which ends with the hero entering into a mixed-race relationship.

It was preparation for the next book that we were, controversially, given to read; the rather grittier ‘Brighton Rock’ by Graham Greene.  Set in the same geographic area, but 3000 years later. We were continuing with the representations of society and conflict in literature.  The rest of the year group had to wait to the third year (year 9) before they studied Brighton Rock – not because of the violence, implied rape or gang warfare; but the use of a four-letter euphemism for ‘breasts’.

Our teacher openly told us that the excuse given to the parent who complained, was that she had come from a new university and had modern ideas. Also, that she had been instructed to spend the rest of the year introducing us to Shakespeare because, it was how we should have been looking at those themes, and it was ‘safe ground to tread’. Shakespeare safe!? The school, by the way, prided itself on being ‘progressive’. 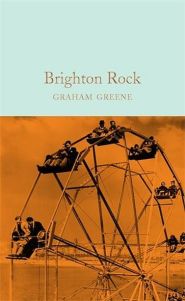 The socialism our teacher brought to class was so much more empowering, caring, and humane than the harsh and repressive views being promulgated by some politicians and clergy at that time. In terms of opening eyes and provoking inquiry, this was an education far more useful than learning to recite Sonnet 20 – although the interpretation given to that by said teacher was also an education.

Back to Warrior Scarlet. What grabbed my attention was the setting on and about: “… the green Ridgeway that ran from the world’s edge to the world’s edge along the High Chalk…”.  I quickly built up a mental picture of the landscape described, particularly in the early chapters. Whilst this was actually set in the South Downs, in my mind, it became conflated with the ancient pathway that is now the Ridgeway National Trail. 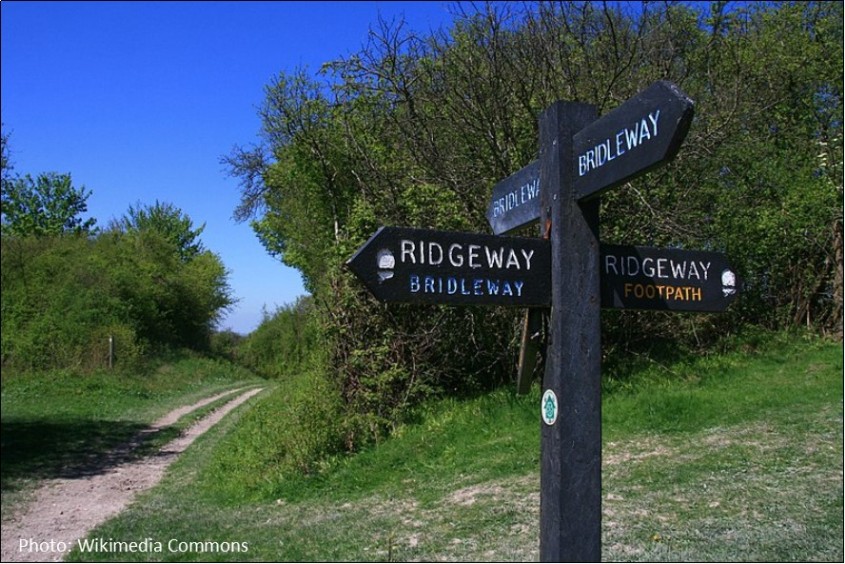 The following year we had a different English teacher who had no problem with the title mistress or, if the rumours were true, being one. She was, however, proudly and fervently Welsh. Wherever possible she would introduce a Welsh element into her teaching of English literature – freely annexing the Welsh Marches and contiguous lands, or any author who may conceivable have had a Welsh connection.

Sadly, by the time I left the school four years later, she had, in the following order: become pregnant, given birth, married, been widowed, and returned to Meirionnydd.

She was responsible for introducing us to the war poets, as part of a World War 1 teaching project jointly delivered by the English, History and Geography departments. She read to us poetry by Hedd Wyn, the bardic name of Ellis Humphrey Evans, who was killed at Passchendaele. I do her a disservice, she recited it from memory, in Welsh; or what the RE master, also Welsh, referred to as the ‘pagan tongue’.  This video is a recitation of it in the Welsh language in which it was composed. 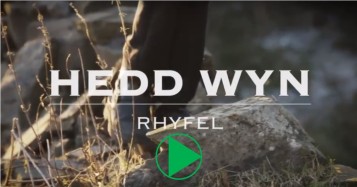 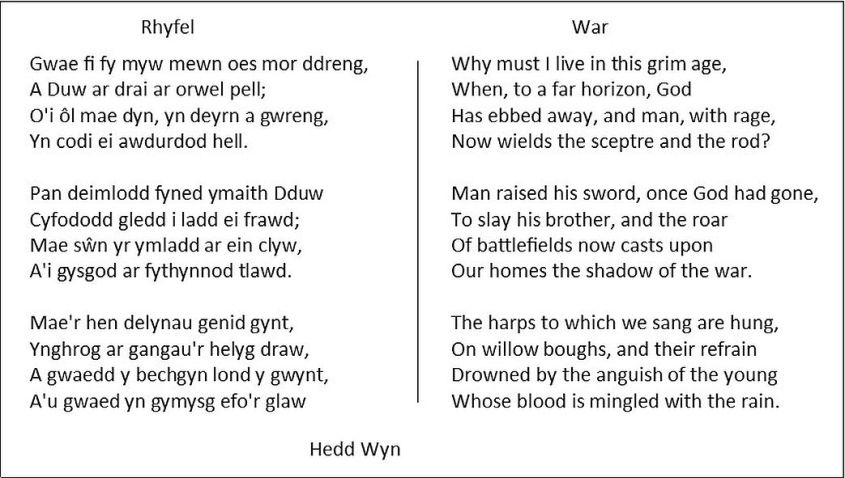 She also narrated the story told by her Grandfather, a bard himself, of being at the 1917 National Eisteddfod with David Lloyd George, the Prime Minister, for the chairing ceremony – the highest honour to be afforded a Welsh poet. To total silence it was announced that the winner, Hedd Wyn, “… lay in a quiet grave.”

Ellis Humphrey Evans came from the village of Trawsfynydd in North Wales and worked as a shepherd on his family’s hill farm. A while ago I stayed at Llan Ffestiniog, 5 miles away, and was struck by just how rugged the countryside was and how hard it must have been to work that land. 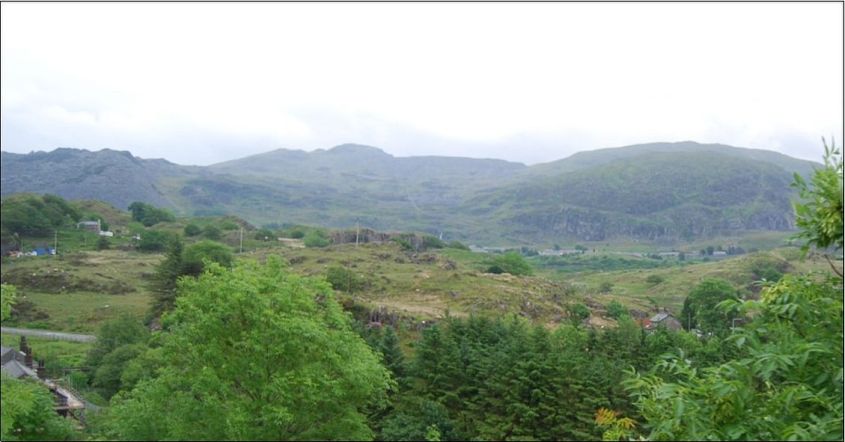 These picture of Soldiers and horses at Trawsfynydd railway station in 1915 show the land as it was when he would have known it. 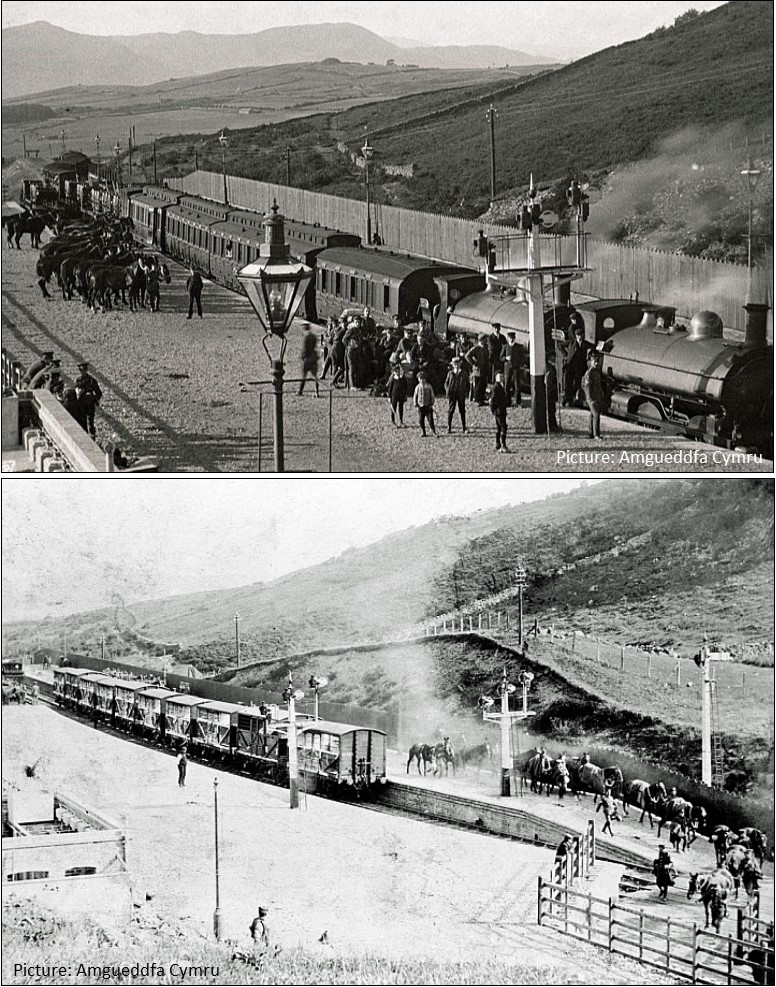 His home of Yr Ysgwrn has been restored and Is open most of the year. It has a new website but may not connect until the premises re-open in February. It can be seen in this video though. 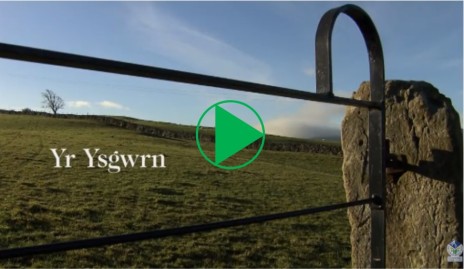 Next came the works of Wilfred Owen and Edward Thomas – both English but with names that suggested a certain Welshness. Owen was born just across the border in Oswestry whilst Thomas despite being born in London came from a predominantly Welsh family.

The school had relocated to new buildings on a new site. Each classroom had a loudspeaker in it that could be broadcast to from a microphone in the school office.  At 11.02 on Armistice Day that year we used it to read ‘Anthem for Doomed Youth’ By Wilfred Owen, to the entire school. 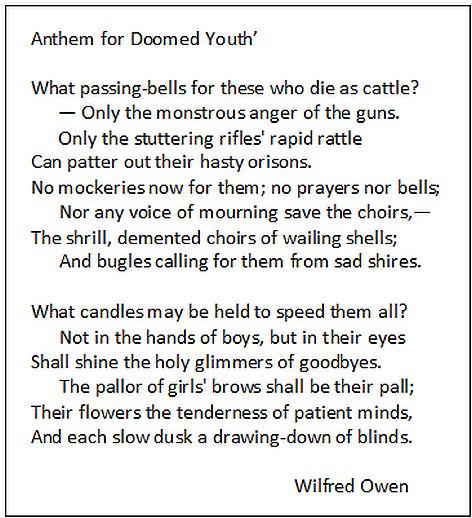 The brief anthology of works by Thomas that we had as a study aid, predominantly contained poetry and prose writing about the countryside. This included extracts from ‘The Icknield Way’, his record of walking that route which incorporates The Ridgeway.  It was these that drew my attention rather than the poems I should have been concentrating on. 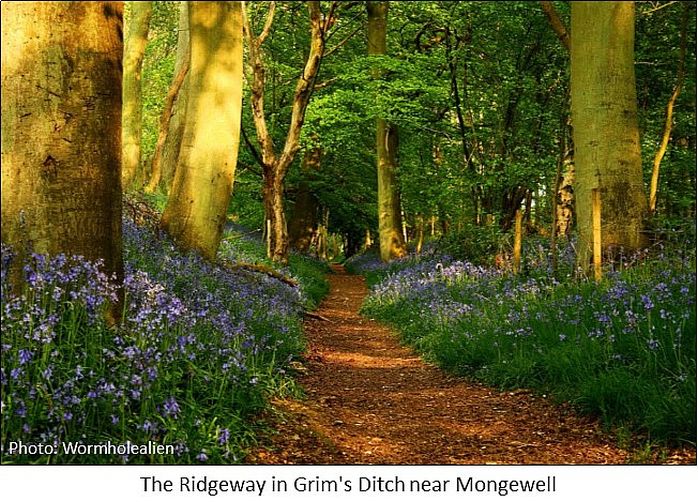 Of the poetry in the book my favourite was ‘Aspen’. It had a structure that was hymn-like and easy to read. For me it painted pictures as vivid as any photograph. Come to that, it still does. 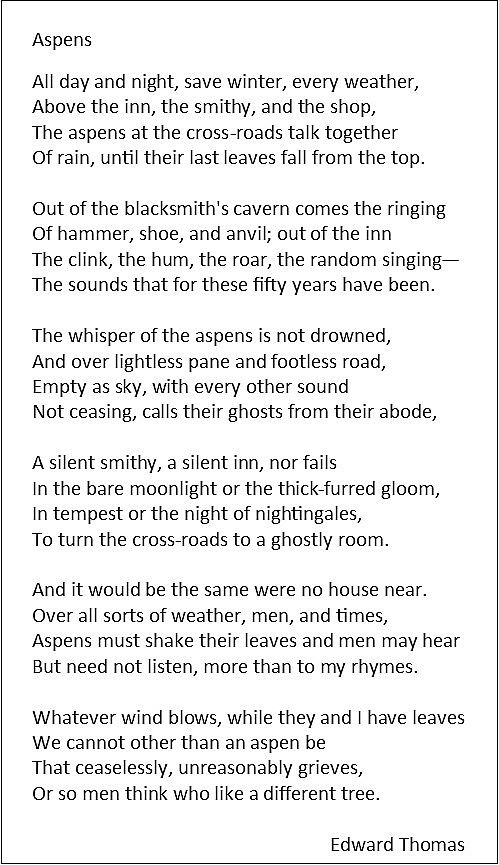 I never got to grips with his poem ‘Roads’; that is not until recent times when I discovered this video. 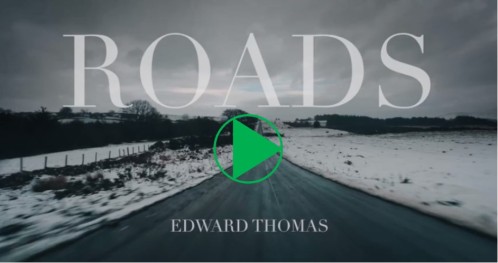 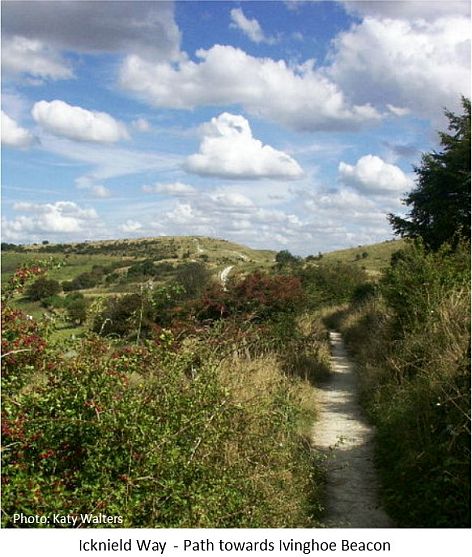 The first part of Edward Thomas’ ‘The Icknield Way’ is a summary of the history of the various theories for the routes of the historic pathways across England. It includes suggestions for how the name Icknield may have come into use.  I’m not sure how useful some of this is; but it does serve to demonstrate the difference between the world of learning in previous centuries and the academic rigour of today. Alas, I fear the internet may be reversing that progress. 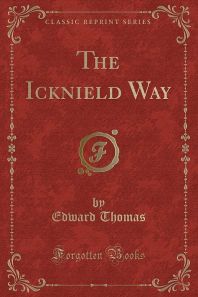 Written only a little over a hundred years ago, it is a diary of his walk along the length of the Icknield Way. I gain a sense from it, that the landscape and trails crossed by Edward Thomas had more in common with the time of King Alfred than with the land as it is today. This sense is strengthened by the simplicity of the line drawings with which the book is illustrated. 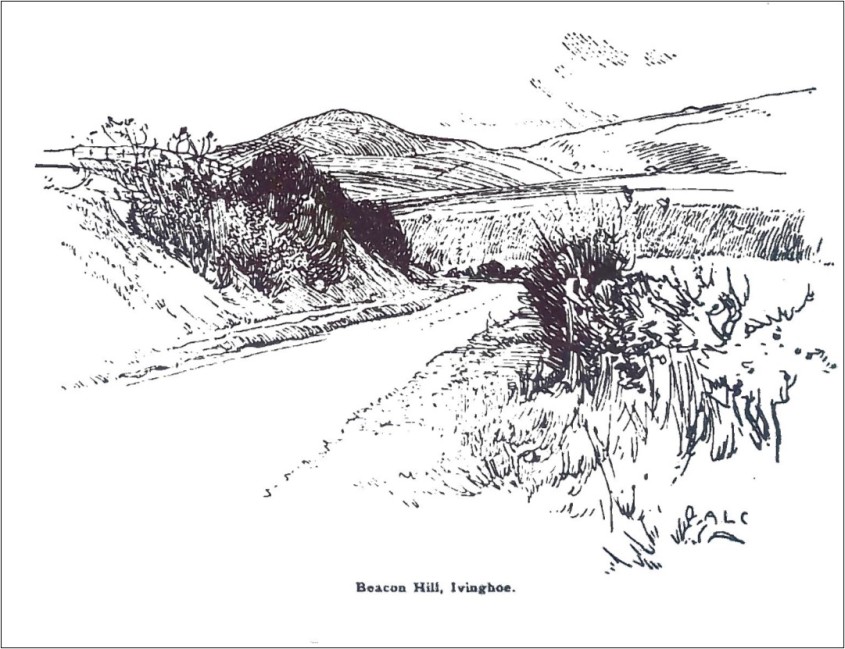 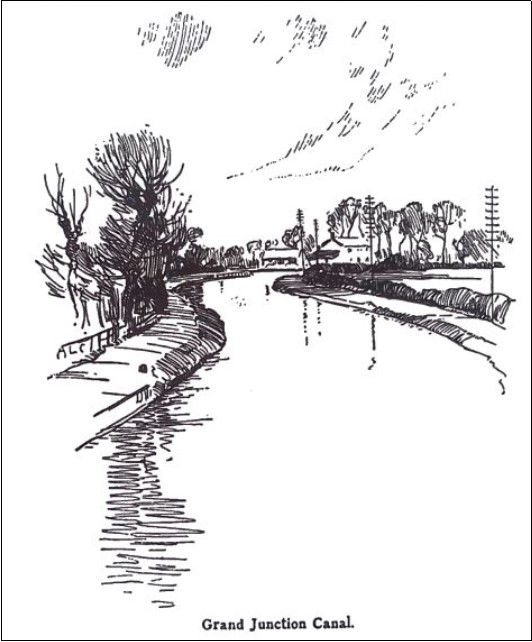 I’ve recently re-read the book as part of my trip planning and will comment on it further when I blog about that.

If you have 25 minutes to spare, River Spirit Films have put on -line a video called ‘The Icknield Way: a journey’. It is described as: “A century after the poet and writer Edward Thomas published his book on the Icknield Way, this short, quirky documentary traces the route of the ancient trackway and drover’s road, setting out to encounter some of the people who live and work along it, and who are still inspired by it. Features the excavation of a Neolithic henge monument, and a haunting, original soundtrack.” 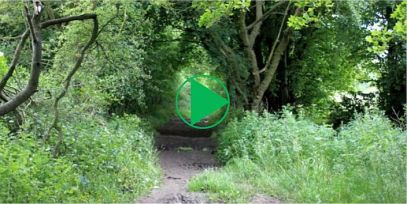 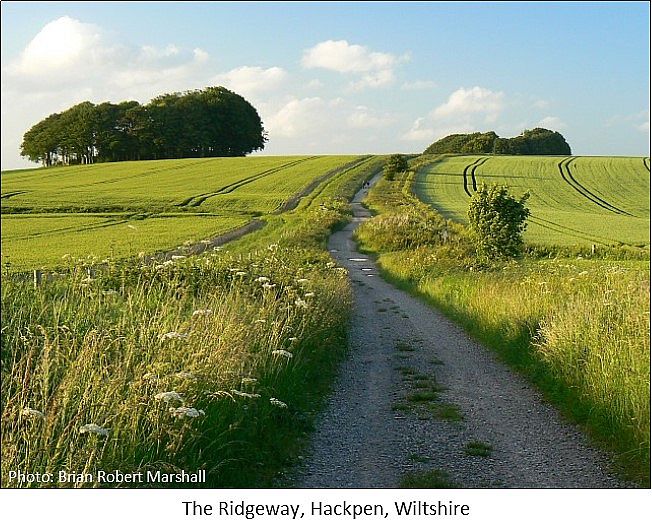 Ten years after discovering the writings Edward Thomas. I was rattling around the West Country in a Landrover visiting farmers as part of my job with a quango. Two of these were in Wiltshire and had the Ridgeway passing through their holdings.

Whilst driving along a farm track one would proudly tell me about the Stone and Bronze Age barrows on his land, and all about the fact that we were driving on the Ridgeway.  He would proudly point out the signs that showed that this was now a national trail.   The other was more sceptical. 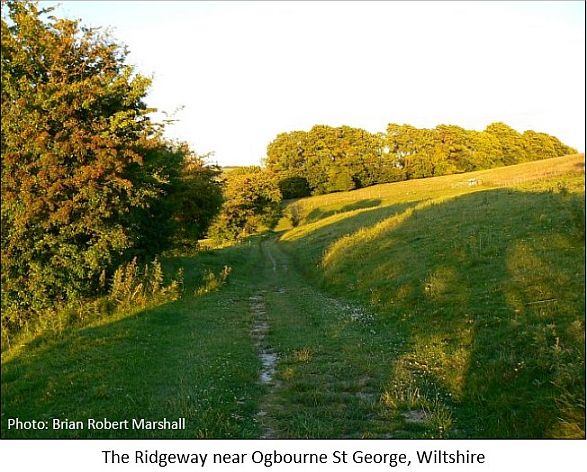 One last thing.  Local bike, book, and out door shops are declining in numbers and I would urge you to use them where you can – the use them or lose them scenario certainly applies, and most offer a range of additional benefits.  To assist those who wish to purchase on-line, there are links from the books featured on this blog to the relevant pages on Amazon. You should be aware that if you purchase having followed one of those links, I will receive a tiny commission from Amazon. 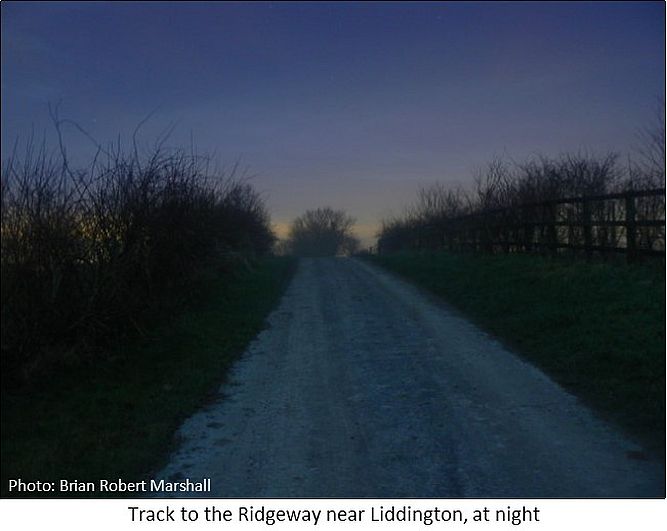