It is simple things in life that give me pleasure. An example, is when I attend an event and spend time exploring something other than my reason for being there.

Last year I attended the ‘Freight in the City Expo’ at Alexandra Palace. The main reason for attending was a presentation on how the City of London were proposing to implement last mile logistics solutions. These had the objective of reducing delivery vehicle mileage and air pollution whilst improving the environment for all users including residents and pedestrians. This was, of course, pre Covid.

I also wanted to look at a couple of new cargo bike and light delivery vehicle designs, and alternative fuel/energy sources for goods vehicles. 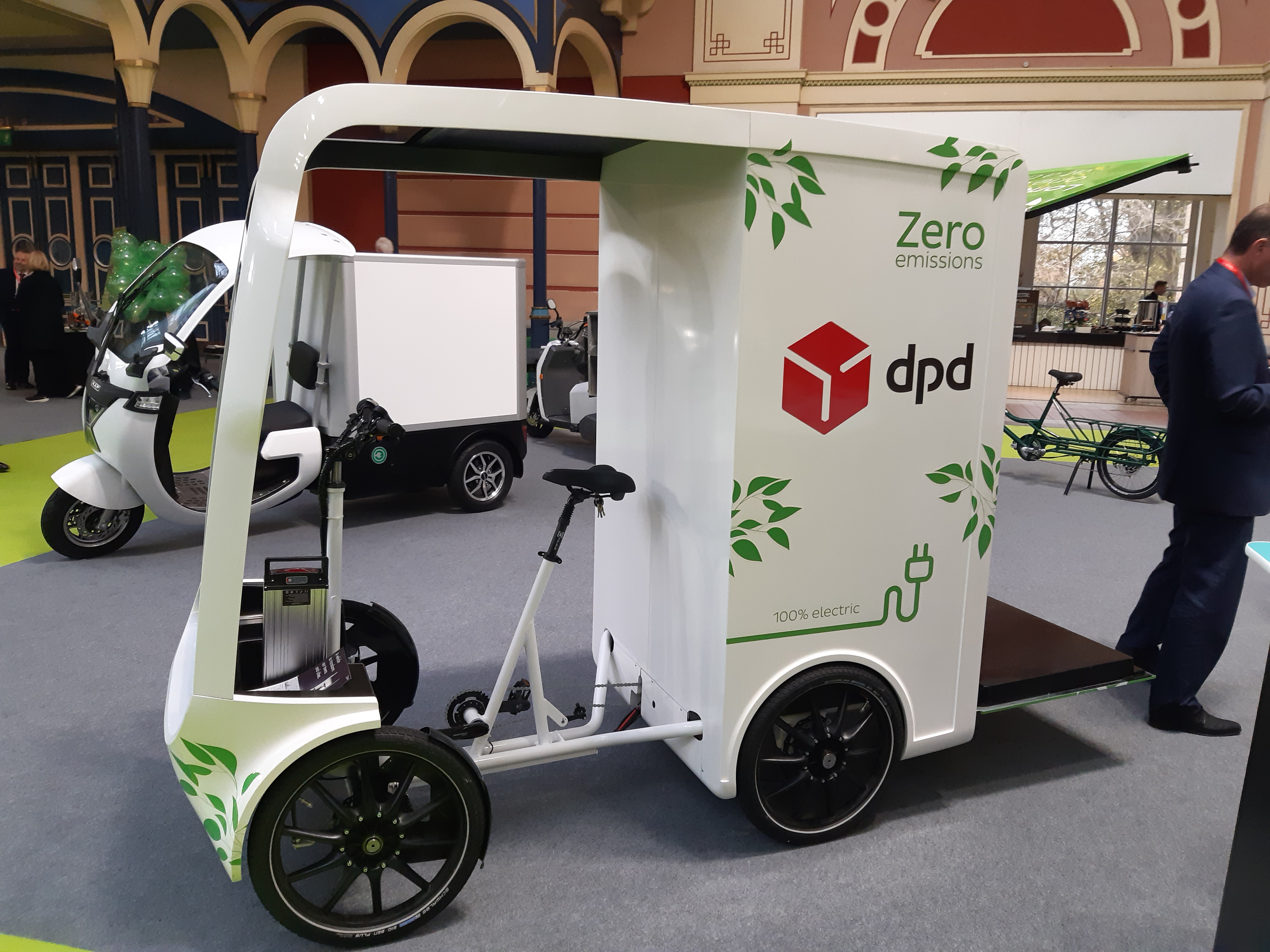 What distracted me though, was the effect that Transport for London’s (TfL) ‘Direct Vision Standard’ was having on those parts of the transport industry which were represented at the expo. 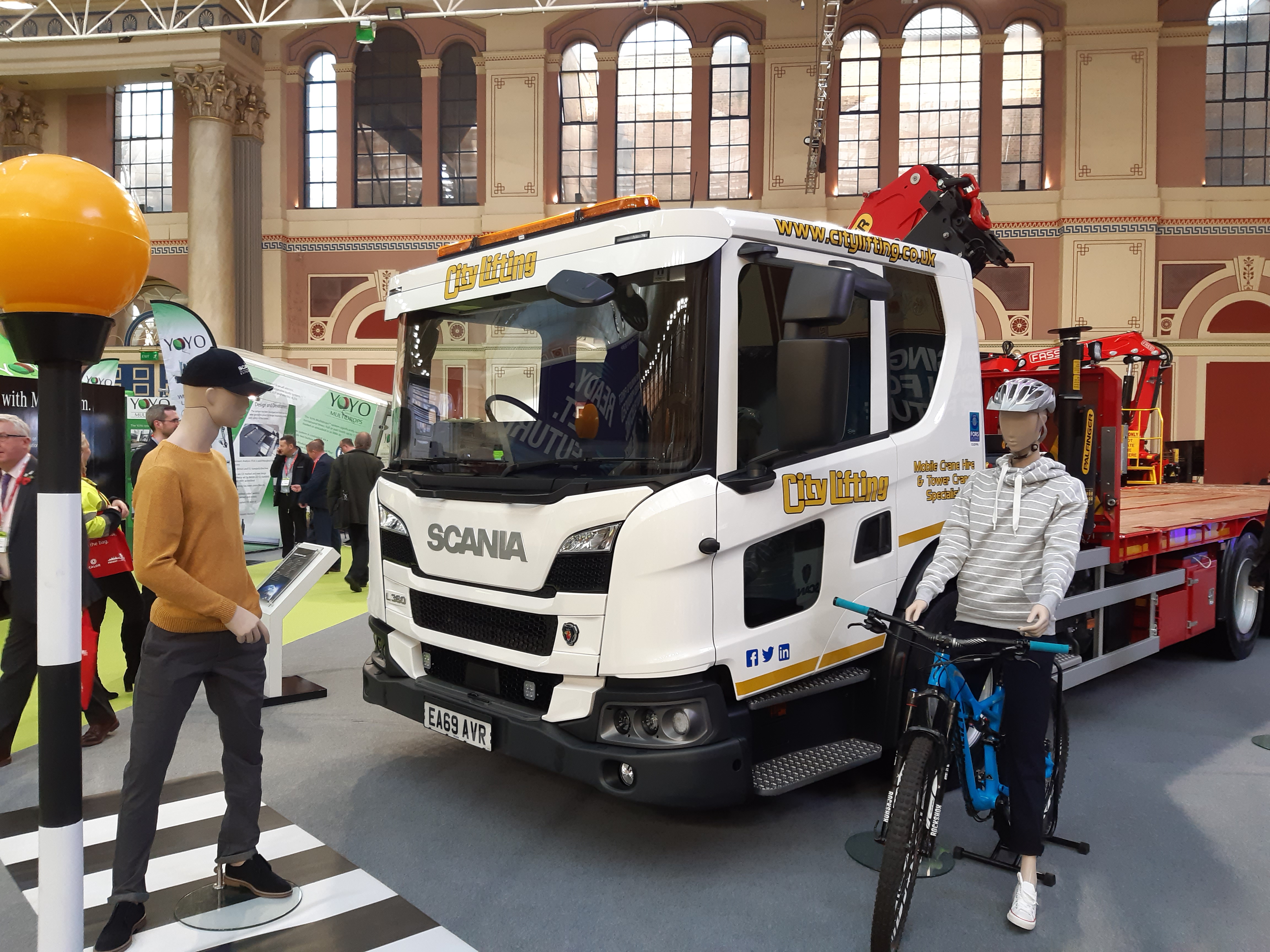 I started driving agricultural tractors at the age of 13 and quickly learnt that a tractor and trailer effectively has six corners, and at least one of these will be out of vision when reversing. The length of a modern articulated lorry exaggerates this even more.

It may be the vagaries of memory, but I seem to recall a time when many lorries had not only a driver but also a driver’s mate. The latter not only helped with loading or unloading, but acted as a banksman (is there a gender neutral alternative other than the less accurate ‘marshal’). In this role they would assist the driver when manoeuvring the vehicle to avoid it coming into conflict with other road users. Bulk loads and palletisation meant that the role of driver’s mate was no longer considered necessary. An efficiency saving for sure; but the loss of an extra pair of eyes to assist the driver.

Rightly or wrongly, I have gained the impression that for many years truck design was more concerned with functionality There was little interest in the welfare of the driver or safety of other road users. The cabs on the vehicles above have limited viability and numerous blind spots.

The picture below shows two tractor units a few generations and a world apart in terms of technology. The new one has bigger and better wing mirrors yet many of those blind spots remain.

The drivers of these HGVs are higher-up than those in smaller vehicles. They are unable to see cyclists on their near-side, shorter pedestrian immediately in front of them, or what is immediately behind.

When the Mayor of London (Sadiq Khan) took office in 2016 he set the target of aiming to eliminate all deaths and serious injuries caused by road collisions from London by 2041. The ‘Vision Zero’ initiative is the means for delivering this and has developed the Direct Vision Standard (DVS).  An ‘HGV Safety Permit’ showing compliance with the DVS will be require for a lorry of more than 12 tonnes gross vehicle weight to operate in Greater London.

Of course, the driver of a vehicle is totally responsible for it. That doesn’t mean they shouldn’t have all the available tools to enable them to operate it as safely as possible. This starts at the design stage of the vehicle.

The DVS is based on how much a driver can see directly through their cab windows. This is then rated from zero (lowest) to five (highest). To gain the necessary safety permit to operate in London, any vehicle rated zero will need improved overall safety derived by fitting additional measures. In most cases this will including a camera monitoring system, an audible left-turn vehicle manoeuvring warning, and cyclist/pedestrian proximity sensors before October 2020. Following the Covid outbreak, enforcement of these measures has been put back to the spring of 2021.

By 2024, the minimum star rating will be raised to three stars. Many vehicle operators have responded by bringing their vehicles to at least the three star standard and ensuring any new vehicles meet the five star standard. London’s DVS will be first initiative of its kind in the world to categorise lorries according to the how much a driver can see directly through their cab windows and by using mirrors, and how big residual blind spots are.

One of the biggest design changes that can be seen on new vehicles is the low cab – change that took place in bus design many years ago.

This local dustcart (refuse collection vehicle) that has a lower cab with bus-style full height glass doors, illustrates the point. The vehicle in the background has side guards to prevent under runs and to prevent another road user falling beneath its wheels. These ‘low entry’ cabs are also appearing on tipper trucks and articulated lorries.

The ubiquitous UPS delivery vehicles have had nearside doors like this for many years. New businesses have grown to meet the needs of the DVS including the retro fitting of additional windows in the doors of older trucks.

Vehicles that fail the minimum one-star direct vision rating must have front and side blind spots completely eliminated or minimised as far as practical. The requirements specify that this should be by use of the following:

Class V and VI mirrors or cameras that eliminate blind spots around the vehicle cab area. 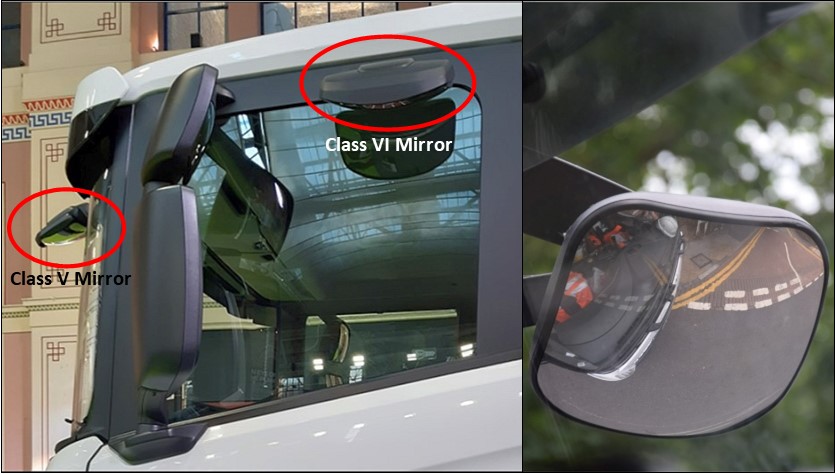 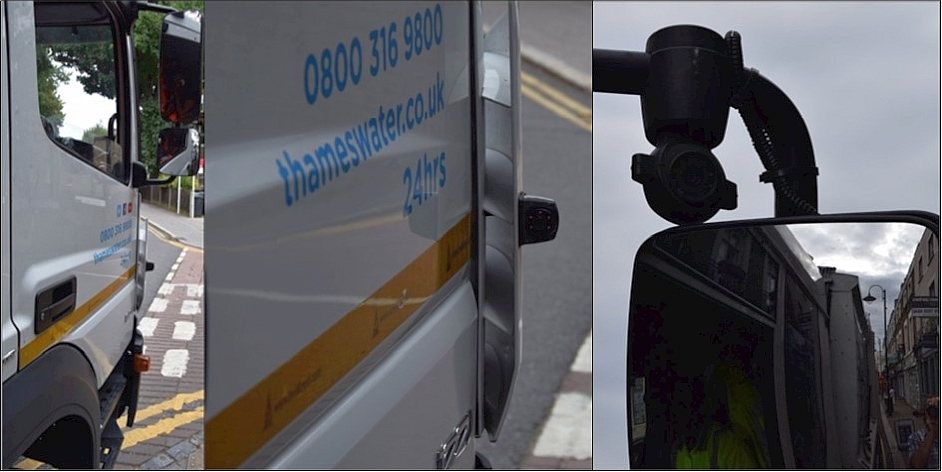 A rear mounted camera gives the driver a full view across the area adjacent to the back of their vehicle when reversing.

Minimising Physical Impact of a Hazard 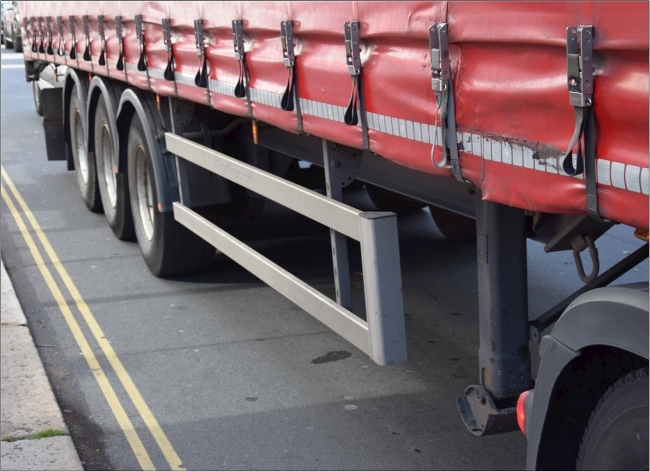 It is worth noting, that in the picture above the straps fastening the curtain side have been properly secured so that they do not flap and becoming a hazard. The side bars shown will help prevent a person falling under the wheels, but there is still some risk of becoming entangled in them.

The solution recommended in Vision Zero is to panel the sidebars in to become side guards, like the lorry in the background of the picture of the dustcart earlier in this blog. Sideguards reduce the chance of injury to cyclists and pedestrians.

The tipper truck above has not only had side panels added, but also a less angular design of upright at the front to reduce the damage it may cause if impacting a body. The picture below shows how good design can remove a potential hazard. In this case, a change of design has moved the protruding hinge of the load sheeting system to above the head height of a pedestrian or cyclist.

As well as visual indication (reversing lights and turn indicators), vehicles will have to be fitted with a working reverse alarm to alert vulnerable road users of a reversing manoeuvre. To be fair, these are already commonplace.

Also required will be a left-turn audible alarm that warns when a driver operates the vehicle’s left turn indicator. These are the disjointed voices that announce, “Caution, this vehicle is turning left”. Recently I noticed that a lorry, waiting at traffic lights on the nearby one-way system, was announcing that it was “… turning right.”

This is another lorry waiting to turn right at the same lights. I have a quick flinch every time I see another road user squeezing through these spaces. The new standard requires improved signage on vehicles but could be bettered to respond to this type of turn right scenario.

Signs on lorries suggesting cyclists should not pass on the left, despite this being where most cycle lanes are, will be replaced. Instead, there will be signage to warn road users of the hazards around the vehicle.

Is This Really Something New?

Many lorry operators already use the ‘Fleet Operator Recognition Scheme’ (FORS) to demonstrate that they follow best practice in terms of safety, efficiency, and environmental protection. The scheme has three standards; Bronze, Silver and Gold.

The DVS largely mirrors the safety requirements of the FORS silver level. As a result, those operators who meet the silver or gold standard will have little, if any, extra work to do in order to comply with the DVS.

Implementation has been timed to coincide with changes to the Low Emission Zone which will require that lorries meet Euro VI emissions standards or pay a daily charge to drive within the Greater London area. Operators changing their vehicles to comply with the latter requirements, could select replacements that also meet the DVS. 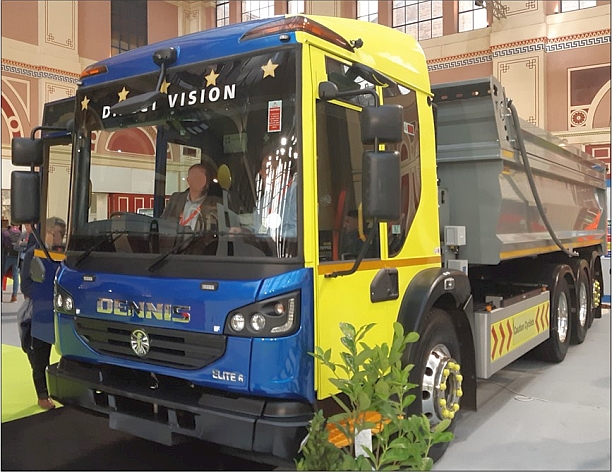 Will it Make a Difference.

All I can base my judgement on is my experience of cycling in Central London over the last 20 years.

I should perhaps say that I have never subscribed to any view other than the vast majority of truck drivers are thoroughly decent people trying to do an honest job of work to the best of their abilities. Likewise, other road users, including pedestrians and cyclists, are not immune from lapses of concentration or from making errors of judgement.

Whilst only one of the above groups may be equipped with 44 tonnes of loaded vehicle, that does not necessarily put them in the wrong when conflict occurs. That is why I personally oppose moves to introduce a presumption of blame on to the driver of a motor vehicle when it is in collision with a vulnerable road user. My experience from conducting accident investigations is that an open mind has to be kept if the true underlying causes of an accident is to be established.

There is a need though for all road users to perceive that they are treated fairly. One of the biggest obstacles to this are the way lazy journalists and sloppy editors report events.  The role of drivers is usually minimised whilst other road users have things personalised to them. One of my favourite headlines was, “Lorry Runs Amok – Two Dogs Hurt.” Assuming that the lorry had no feelings, emotions or control over what happened to it; then this should have been reported as ‘Driver Loses Control of Lorry’. Later it was established that failure of a third-party brake component not manufactured to the original specification caused the driver to lose control.

I’ve seen first hand not only the affects that the trauma of a road accident has on those directly involved, but also those who attend to aid the victims. I fully support the DVS as I believe that it gives drivers the tools they need to manoeuvre safely, and results in a massive reduction in blind spots. The professional driver can use their skills and abilities to operate the vehicle safely and in a way that does not endanger vulnerable road users.

In recent years my perception is that truck drivers appear to be more aware of vulnerable road users. The FORS scheme has meant that many vehicles have become better equipped and drivers given the tools to be more aware of risk around their vehicle.

The Metropolitan Police ran a ‘Changing Places’ campaign encouraging drivers and cyclists to exchange places as part of a drive to improve road safety; and more recently have been running ‘Operation Close Pass’.

The increased provision in recent years of both segregated and unsegregated cycle routes has encouraged more people to cycle. This has increased cycling visibility, so drivers are likely to be more aware of the need to cater for other road users.